World number one Caroline Wozniacki's disappointing US Open preparations continued on Wednesday as she crashed out to young American Christina McHale at the ATP and WTA hardcourt tournament. 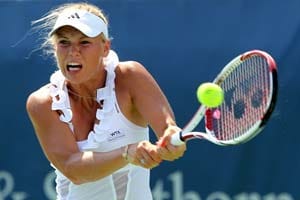 World number one Caroline Wozniacki's disappointing US Open preparations continued on Wednesday as she crashed out to young American Christina McHale at the ATP and WTA hardcourt tournament.

The 21-year-old Dane's 6-4, 7-5 loss resembled her collapse last week in Toronto, where she went out in the second round after letting a 5-1 lead slip away in the second set.

Wozniacki, who holds the WTA's top ranking despite disappointing showings at the French Open and Wimbledon, had only returned to action in Toronto after a month out with a painful shoulder.

Wozniacki, who has made headlines lately for being the new girlfriend of US Open golf champion Rory McIlroy, has not won a match since Wimbledon, having received first-round byes in both Toronto and Cincinnati.

However, Wozniacki - a finalist at the 2009 US Open and the winner of five titles so far this year - was philosophical about her poor form and vowed to put it right.

"Such things happen during a season, to have highs and lows," Wozniacki said.

"I am going to come back stronger and win matches very soon," she added. "I cannot remember the last time that I lost my first match on successive occasions. But such things happen."

She said the loss hinged on McHale's good serving at key moments in the match, and her whopping total of 37 unforced errors.

"I would have liked to have more matches under my belt before the US Open but I am going to train even harder," added Wozniacki, who will play in New Haven next week.

Meanwhile, Serena Williams withdrew from the tournament ahead of her second-round match due to a foot problem.

Williams is on a run of 12 straight wins after successive titles at Stanford and Toronto, but the WTA explained that the 29-year-old had aggravated an injury to the big toe on her right foot.

"I felt a pain while playing (in the first round on Tuesday) and I don't think it's the right time to be taking risks," said Williams, who underwent a foot operation after winning Wimbledon in July 2010.

That injury, followed by a pulmonary embolism, kept her away from the courts for almost a year.

She returned at Eastbourne in June, with her world ranking having slipped to 175, but the successes at Stanford and Toronto have seen her rocket up the rankings to 31 this week.

"I'll take a rest and prepare for the US Open as best as I can," added Williams, who is seeking a 14th Grand Slam singles crown.

The time off will give her a chance to go to the wedding of reality star Kim Kardashian, who is marrying NBA player Kris Humphries in California over the weekend.

"Now that I have time, I probably will," said Williams, who is friends with Kardashian.

Williams' withdrawal allowed Australian world number 10 Samantha Stosur - who lost to the American in the Toronto final on Sunday - to advance to a third-round contest with Chinese world number five Li Na.

In other men's matches on Wednesday, seventh-seeded American Mardy Fish cruised past Nikolay Davydenko, 6-0, 6-2, and France's Gael Monfils, who is seeded sixth, stopped Ivan Dodig when the Croatian retired in the third set.

Comments
Topics mentioned in this article
Caroline Wozniacki Andy Roddick Andy Murray Juan Martin del Potro Serena Williams Christina McHale Roger Federer David Nalbandian Tennis
Get the latest updates on India vs Australia Series, check out the India vs Australia Schedule for 2020-21 and Ind vs Aus live score . Like us on Facebook or follow us on Twitter for more sports updates. You can also download the NDTV Cricket app for Android or iOS.