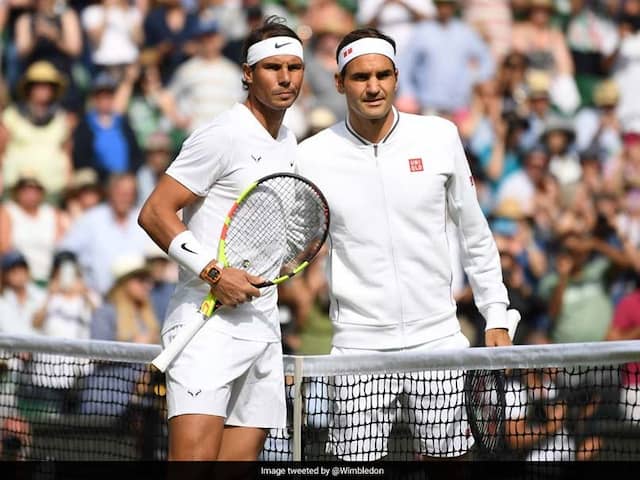 Roger Federer will play Novak Djokovic after he reached his 12th Wimbledon final on Friday.© Twitter

Roger Federer will play Novak Djokovic after he reached his 12th Wimbledon final on Friday beating great Spanish rival Rafael Nadal 7-6 (7/3), 1-6, 6-3, 6-4. The 37-year-old eight-time champion -- the third oldest Grand Slam finalist in the modern era -- will be appearing in his 31st final at the majors. It is the first time the Swiss legend has beaten Nadal in a Grand Slam semi-final having lost all four of their previous encounters, most recently at this year's French Open. Earlier, defending champion Novak Djokovic beat Roberto Bautista Agut 6-2, 4-6, 6-3, 6-2 to reach his consecutive Wimbledon finals. Wold No. 1 Djokovic won the first set quite easily but Spain's Bautista Agut came back strongly to win the second set. From there on it was all Djokovic as he clinched next two sets with ease.

Novak Djokovic Roberto Bautista Agut Roger Federer Rafael Nadal Tennis Live Blogs
Get the latest updates on IPL 2020, check out the IPL Schedule for 2020 and Indian Premier League (IPL) Cricket live score . Like us on Facebook or follow us on Twitter for more sports updates. You can also download the NDTV Cricket app for Android or iOS.