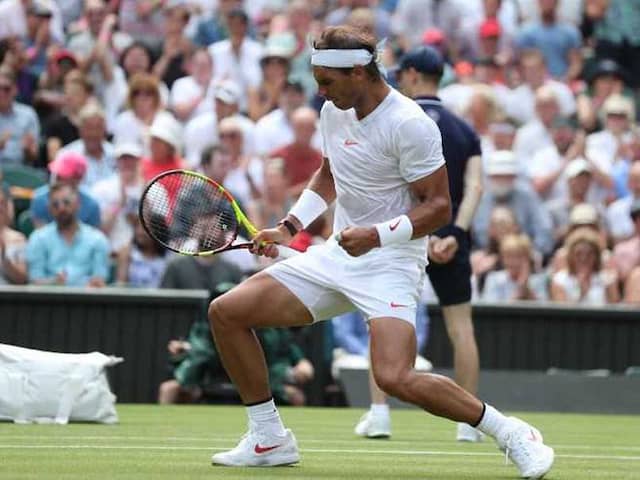 Rafael Nadal was tested by world number 77 Kukushkin, a player who is coached by his wife.© AFP

Former champions Rafael Nadal and Novak Djokovic battled into the Wimbledon third round on Thursday but third seed and 2017 runner-up Marin Cilic crashed out. World number one Nadal defeated Mikhail Kukushkin of Kazakhstan 6-4, 6-3, 6-4 and will next face Australian teenager Alex de Minaur. Djokovic, the three-time champion, needed treatment on his left thigh on Court Two but still had too many weapons for Argentina's Horacio Zeballos, winning 6-1, 6-2, 6-3. Djokovic has now made the third round for 10 consecutive years and will face either British 21st seed Kyle Edmund or US qualifier Bradley Klahn.

But his defeat is good news for defending champion Roger Federer, who was on course to face Cilic in the semi-finals.

The Kazakhstani was made to pay for converting just two of 13 break points in the match.

"It was very tough because he played very well," said 11-time French Open champion Nadal, who is chasing an 18th major.

"On grass, the ball bounces really low so it was a good test.

"I knew it was going to be a tough match, so I went onto the court with the determination and intensity, thinking I can't make any mistakes."

For Djokovic, meanwhile, victory was his 60th at Wimbledon -- making him just the fifth man to claim 60 wins at the All England Club in the Open Era.

Three-time major winner Stan Wawrinka was unable to follow up his first round defeat of sixth seed Grigor Dimitrov when he lost 7-6 (9/7), 6-3, 7-6 (8/6) to Italian qualifier Thomas Fabbiano.

The world number 133 is in the third round for the first time after winning back-to-back matches on the main tour for only the second time in 2018.

Barty came back from 2-5 down in the second set to see off 2014 runner-up Bouchard who came through qualifying this year.

Novak Djokovic Marin Cilic Tennis
Get the latest Cricket news, check out the India cricket schedule, Cricket live score . Like us on Facebook or follow us on Twitter for more sports updates. You can also download the NDTV Cricket app for Android or iOS.