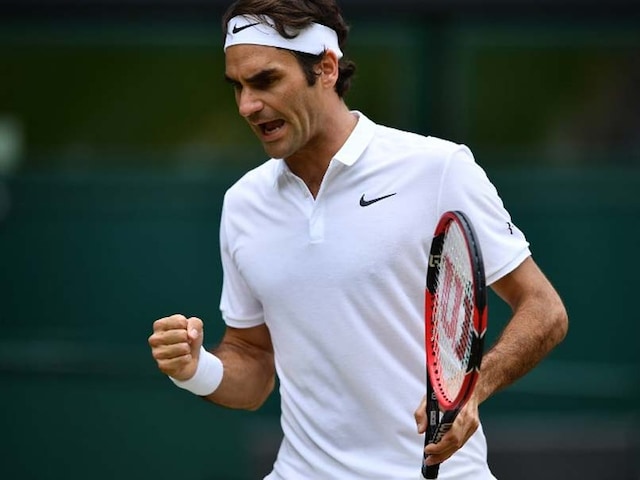 Seven-time champion Roger Federer reached his 11th Wimbledon final on Friday, downing 2010 runner-up Tomas Berdych of the Czech Republic 7-6 (7/4), 7-6 (7/4), 6-4. The 35-year-old, bidding to win a record eighth title and become the oldest champion at the All England Club in the Open era, will face Croatia's Marin Cilic in Sunday's final.

"I feel very privileged to be in another final and get the pleasure to play on Centre Court another time," said Federer who was playing in his 42nd Grand Slam semi-final.

He is the second oldest man to make the Wimbledon final after 39-year-old Ken Rosewall finished runner-up in 1974.

With Andy Murray and Novak Djokovic suffering injury-hit exits in the quarter-finals and Rafael Nadal losing in the last 16, Federer will be the favourite to become Wimbledon's oldest champion, succeeding Arthur Ashe who was almost 32 when he won in 1975.

But despite leading Cilic 6-1 in career meetings, Federer will be wary of a man who was two sets to love up on him in the quarter-finals last year and held match points.

"We had a brutal quarter-final last year here and he crushed me at the US Open in 2014," said Federer.

"Things got complicated and I got lucky to win last year. Marin is a great guy and I'm happy that he's in his first Wimbledon final."

Federer had defeated 2010 runner-up Berdych 18 times in 24 matches before Friday and he was quickly in the ascendancy, breaking for 3-2.

But an uncharacteristic double fault handed the break back in the eighth game before the 18-time major winner played a more composed tiebreak.

He pocketed the opener when Berdych miss-hit and ballooned the ball wide.

Berdych kept pressing but had to fend off more break points in the fourth game of the second set before Federer again swept through the breaker on the back of a 5/1 lead.

The big Czech would have to win from two sets down at the Slams for the first time in 38 matches if he were to return to the final.

Berdych, who had the face of his vanquished quarter-final opponent Djokovic painted on the tongues of his tennis shoes, saved a break point in the fifth game of the third set.

Victory was his in the 10th game when Berdych netted a weary forehand.

Cilic, the 2014 US Open winner, fired 25 aces and 70 winners past world number 28 Querrey, the man who ended Murray's reign as Wimbledon champion in the quarter-finals.

"It's unbelievable. I have played really well from the start of the tournament," said 28-year-old Cilic.

"Sam played at a high level especially in the first set. I was 4/1 up in the tie-break and didn't convert.

"But after that I was better in the return games. I thought the level was really high.

"I'm feeling a positive on the court. It's extremely important. My emotions are helping me a little bit."

"Roger is playing the best tennis of his career on this court," said Cilic, the second Croatian man to make the final after 2001 champion -- and former coach -- Goran Ivanisevic.

"I never doubted it. Who knows what will happen in the final? It's great to see Cilic there," Ivanisevic told the BBC.

Cilic took a 4-0 career lead over Querrey into Friday's semi-final, including a marathon 5hr 31 min win at Wimbledon in 2012, the second longest match in tournament history.

Comments
Topics mentioned in this article
Roger Federer Tomas Berdych Tennis
Get the latest Cricket news, check out the India cricket schedule, Cricket live score . Like us on Facebook or follow us on Twitter for more sports updates. You can also download the NDTV Cricket app for Android or iOS.