Novak Djokovic and Roger Federer once again showed why they are adored by fans across the globe. 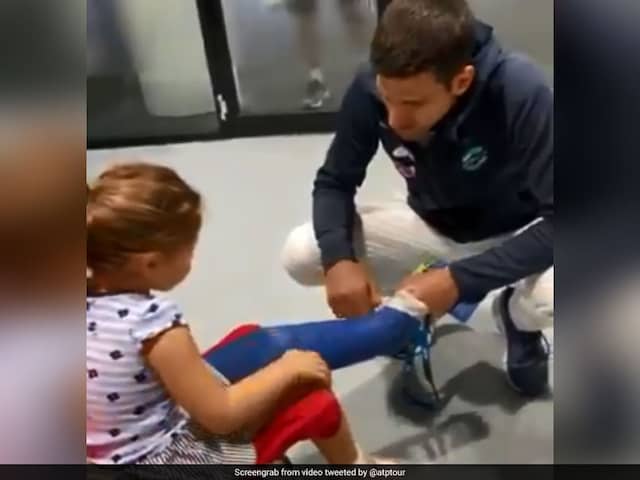 Novak Djokovic even drew a duck on the cast of the young girl who had hurt her left leg.© Twitter

Roger Federer and Novak Djokovic are two of the biggest names in world tennis and both are currently engaged at the Australian Open, the first Grand Slam of the year. The duo have been winning hearts on and off the court and along with Rafael Nadal continue to dominate the men's circuit despite being in the twilight of their careers. On Tuesday, Novak Djokovic and Roger Federer once again showed why they adored by fans across the globe. The duo were seen meeting a young girl, who had a cast on her left leg. Both tennis stars then proceeded to sign the cast with Djokovic even drawing a duck for the young fan.

While Roger Federer and Novak Djokovic were captured on video signing the cast, the Swiss maestro also revealed that Rafael Nadal had already signed the cast on the young girl's leg.

"I will sign next to Rafa (Rafael Nadal)," Federer was heard saying on the video.

Both Federer and Djokovic are in action on Tuesday in the Australian Open. The third-seeded Swiss is up against Tennys Sandgren of United States in the quarterfinals while Djokovic will face Canadian star Milos Raonic, also in the last eight.

Swiss great Federer has faced most of the top players but never Sandgren, the world number 100 who stands in the way of a potential semi-final with holder Djokovic.

The winner will face the victor of the other quarter-final on Tuesday between 32nd seed Milos Raonic and Djokovic, the second seed.

Raonic's weapon is his exocet missile of a serve -- he has played 59 service games and is yet to be broken, pumping down 82 aces.

Nadal, on the other hand, was in action on Monday, winning the grudge match with Nick Kyrgios to reach the Australian Open quarter-finals and keep the heat on Federer's record for Grand Slam titles.