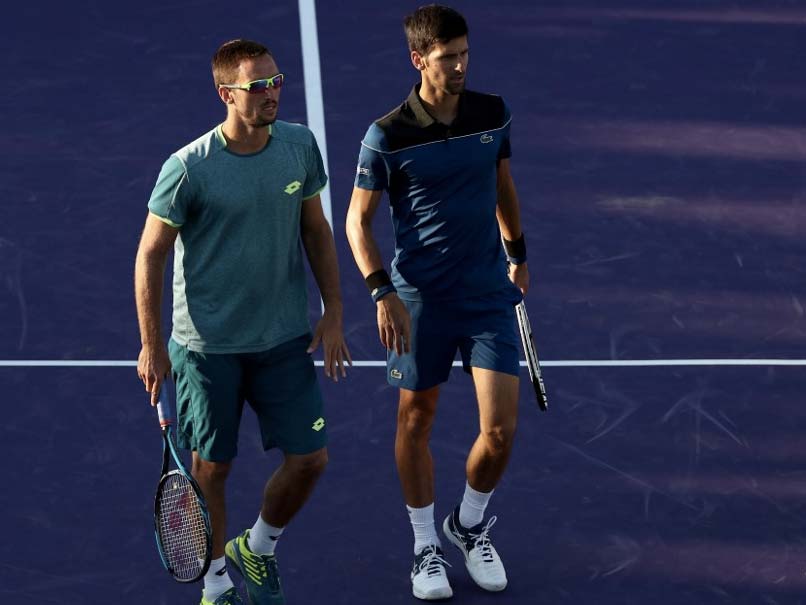 Grigor Dimitrov, Borna Coric and Viktor Troicki have all tested positive for coronavirus after taking part in an exhibition tennis tournament in the Balkans featuring world number one Novak Djokovic, raising questions over the sport's planned return in August. Croatia's Coric, ranked 33rd in the world, revealed Monday he had tested positive for COVID-19, with Troicki confirmed to have contracted the virus several hours later. It follows Sunday's announcement by Dimitrov that he had also tested positive after pulling out of the exhibition event in Croatia, one of the biggest since the tennis season was halted because of the pandemic.

Coric tweeted: "I want to make sure anyone who has been in contact with me during the last few days gets tested!

"I am really sorry for any harm I might have caused! I'm feeling well and don't have any simptoms (sic). Please stay safe and healthy!"

One of Djokovic's coaches and another member of Dimitrov's entourage have also reportedly tested positive for the virus, according to Croatia's N1 television channel. Troicki, meanwhile, played Novak Djokovic last week in Belgrade.

Coric had beaten Bulgaria's Dimitrov in the second leg of the Adria Tour in Zadar on Croatia's Adriatic coast on Saturday.

Dimitrov withdrew from the Balkans tournament following that match, complaining of feeling unwell.

Sunday's final between Djokovic, who is president of the ATP Player Council, and Russia's Andrey Rublev was immediately cancelled as a precaution.

Australian star Nick Kyrgios pulled no punches in his reaction to Coric's tweet.

"Boneheaded decision to go ahead with the 'exhibition'," Kyrgios wrote on social media.

"Speedy recovery fellas, but that's what happens when you disregard all protocols. This IS NOT A JOKE."

Britain's Andy Murray called it "a lesson for all of us".

"Once you start having mass gatherings with people coming in from all sorts of countries, it's a recipe for it to kick off," Murray said.

Both Zverev and Cilic later took to Twitter to say they their tests had returned negative for the virus which has killed over 465,000 people.

"I have just received the news that my team and I have tested negative for COVID-19," Germany's Zverev wrote.

"I deeply apologize to anyone that I have potentially put at risk by playing this tour."

He said he would now be following "self-isolating guidelines" whilst Cilic announced his intention to quarantine for 14 days.

Djokovic will reportedly speak to the public on Tuesday after receiving the results of his test.

Details of Coric's positive test emerged as Serbian football league champions Red Star Belgrade reported that five of their players had gone down with coronavirus just 12 days after their derby clash with Partizan Belgrade.

The game was watched by 16,000 fans, the largest sporting gathering seen in Europe since the continent went into lockdown in March.

Dimitrov, Djokovic and Thiem, as well as the other players, were then seen partying at a packed Belgrade night spot.

Thiem has since travelled to the south of France to play in another exhibition tournament in Nice.

The Adria Tour had already suffered an embarrassing setback when the planned Montenegro leg of the four-nation tournament was cancelled when it became apparent Serbia's health requirements did not match up to those of Montenegro.

Commenting on social distancing measures during the Belgrade leg, Djokovic argued that both Serbia and the region had been relatively successful in containing the virus.

"Of course you can criticise, you can also say this is dangerous or not, but it's not up to me to make the calls what is health-wise right or wrong," he stated.

Last week, the ATP and WTA said they were restarting their tours in August.

However, the US Open in New York will be played behind closed doors and under strict health protocols which Djokovic has described as "extreme" and "impossible".

Novak Djokovic Borna Coric Tennis
Get the latest updates on ICC T20 Worldcup 2022 and CWG 2022 check out the Schedule, Live Score and Medals Tally. Like us on Facebook or follow us on Twitter for more sports updates. You can also download the NDTV Cricket app for Android or iOS.