Venus Williams beat qualifier Iveta Benesova of the Czech Republic 6-4, 6-3 Tuesday in the Family Circle Cup, bouncing back from her quarterfinal loss at Key Biscayne. 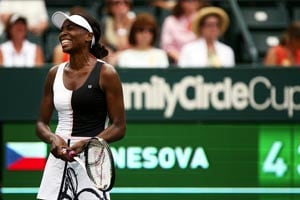 Venus Williams beat qualifier Iveta Benesova of the Czech Republic 6-4, 6-3 Tuesday in the Family Circle Cup, bouncing back from her quarterfinal loss at Key Biscayne.

"This is great for me to be in another match and to be in the second round," she said. "It was a good start."

The Family Circle Cup is Williams' first clay-court tournament in months. She withdrew from last year's U.S. Open after being diagnosed with a fatigue-causing autoimmune disease, then returned last week and won four matches in the Sony Ericsson Open before losing to eventual champion Agnieszka Radwanska in straight sets.

Williams said she takes a lot of ice baths and took three days off just to rest following Thursday's loss.

"For me it's just about having energy at this point. I try not to worry about tomorrow," she said.

But Williams acknowledges she is thinking about getting her ranking up so she can qualify for the London Olympics this summer.

"I'm very happy I'm on the right road, but I'm very unhappy I didn't do more" at Key Biscayne, she said.

"That's the past. There's so many opportunities going forward and I try to focus on the forward and focus on every day and today's win takes me closer," she said.

Williams has won seven Grand Slam tournaments but is now ranked No. 87. She won the Family Circle Cup eight years ago and is unseeded this time.

One aspect of her game that seemed to be back to normal was her serve. She had six aces and her first serve consistently topped 110 mph, one hitting 117.

Sister Serena is seeded fifth this week and plays in Tuesday night's featured match against Elena Vesnina of Russia. The Williams sisters could meet in Saturday's semifinals.

Also onÂ  Tuesday, No. 2 seed Samantha Stosur, the highest seed after Radwanska withdrew before the tournament with a back injury, beat American Jamie Hampton 6-0, 7-5.

Comments
Topics mentioned in this article
Tennis Samantha Stosur Nadia Petrova Sania Mirza Shuai Peng Elena Vesnina Vera Zvonareva Iveta Benesova Venus Williams
Get the latest updates on IPL 2020, check out the IPL Schedule for 2020 and Indian Premier League (IPL) Cricket live score . Like us on Facebook or follow us on Twitter for more sports updates. You can also download the NDTV Cricket app for Android or iOS.