Novak Djokovic is now just three Slams behind Rafael Nadal and six back from the record 20 held by Roger Federer. 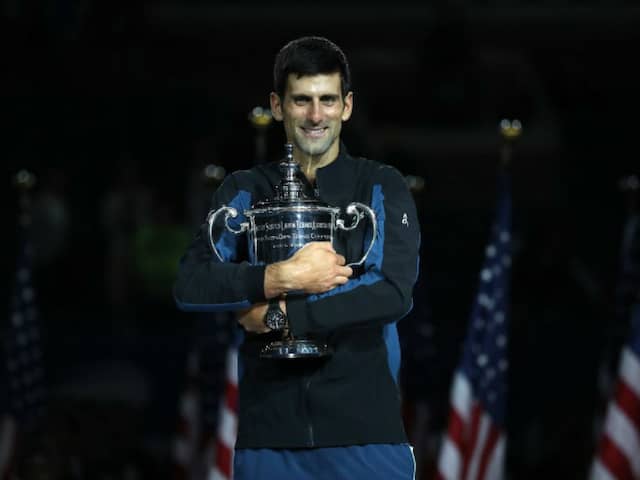 Djokovic's victory also means that 50 of the last 55 majors have been won by the 'Big Four'.© AFP

Novak Djokovic clinched his third US Open title on Sunday with a 6-3, 7-6 (7/4), 6-3 triumph over Juan Martin del Potro, taking him level with Pete Sampras's mark of 14 Grand Slams. Djokovic, playing in his eighth final in New York and already the champion in 2011 and 2015, is now just three Slams behind Rafael Nadal and six back from the record 20 held by Roger Federer. It was also the third time the 31-year-old Serb - who missed last year's tournament with an elbow injury which sent his career into a mini-crisis - completed the Wimbledon-US Open double.

For world number three Del Potro, it was a heartbreaking experience coming in just his second Slam final, nine years after he was crowned US Open champion.

It was Djokovic's 15th win over the Argentine and fifth in five at the Slams.

"I want to say Pete, I love you, you're my idol," said Djokovic of Sampras.

"To the support of the loved ones, my kids, my wife, my small team of people that has been there with me through difficult times as well," added the Serb who underwent elbow surgery after the Australian Open in January."

For world number three Del Potro, it was a heartbreaking experience coming in just his second Slam final, nine years after he was crowned US Open champion before a long battle with wrist injuries pushed him into depression and to the brink of retirement.

"When I had my surgery I could truly understand what Juan Martin was going through when he had surgeries that kept him away from the tour for two or three years," added Djokovic.

The victory also means that 50 of the last 55 majors have been won by the 'Big Four' of Federer, Nadal, Djokovic and Andy Murray.

After taking just two points off Del Potro's first three service games, Djokovic, in his eighth final in New York and 23rd at the majors, pounced to break for 5-3.

The key was his success with a lung-busting 22-shot rally and he pocketed the set when the 29-year-old del Potro netted a forehand.

It was only the second set dropped by the Argentine at the tournament.

For Djokovic, it was an illustration of him growing into the championships as he took his run of consecutive sets won to 14, stretching back to the second round against Tennys Sandgren.

Djokovic was soon 3-1 up in the second set before Del Potro carved out his first break point of the match to level at 3-3.

He had three more chances in the eighth, all saved by Djokovic in a marathon 20-minute game which left even Hollywood superstar Meryl Streep clasping her head in astonishment.

The effort took its toll on a suddenly weary-looking Del Potro as a 95-minute set was claimed by Djokovic in the tiebreak.

Del Potro was looking at having to become the first man since Pancho Gonales in 1949 to win the US title from two sets down.

Djokovic sprinted into a 3-1 lead in the third set before a battling Del Potro clung on, hitting back for 3-3.

But off the back of a 24-shot rally, Djokovic broke again for 5-3 and he was within tantalising touching distance of his 14th Grand Slam title, just three months after he had left Roland Garros in despair after a shattering quarter-final exit.

Novak Djokovic Juan Martin del Potro Tennis
Get the latest Cricket news, check out the India cricket schedule, Cricket live score . Like us on Facebook or follow us on Twitter for more sports updates. You can also download the NDTV Cricket app for Android or iOS.