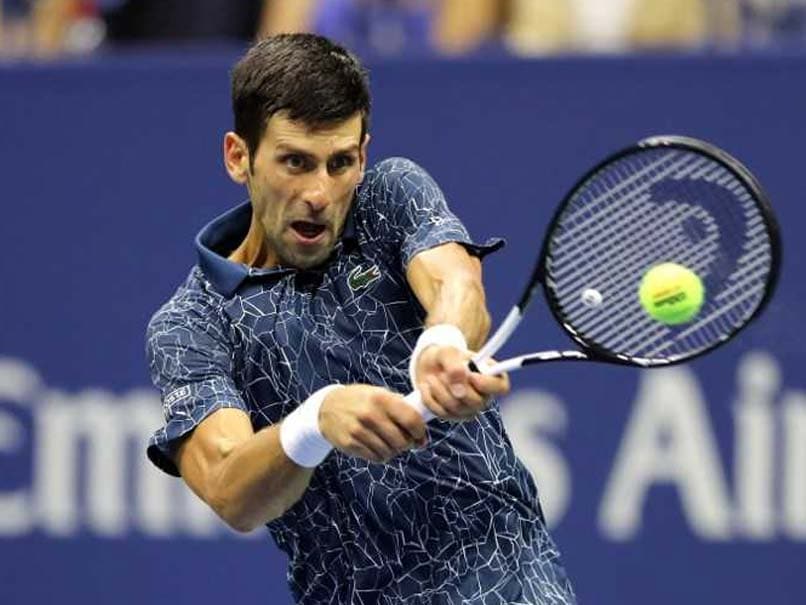 05:25 IST: We leave you with all the highlights of the US Open men's singles final match here. Until next time, it's goodbye!

05:08 IST: Victory for Novak Djokovic! The Serbian is the US Open men's singles champion. Novak Djokovic joins legend Pete Sampras to win 14 Major Titles, it is also his third US Open title!Difficult loss for Juan Martin Del Potro he has been reduced into tears.

05:04 IST:Djokovic to serve,15-all. Backhand return from Del Potro finds the net. Championship point for Djokovic after three hours and 15 minutes!

Listen to the roar of the fans in Flushing Meadows!@delpotrojuan breaks Djokovic to get back on serve in the 3rd set!#USOpen pic.twitter.com/VMclxzHKRS

04:37 IST: Djokovic to serve,forehand return from Del Potro to take 15-0 lead, Novak djokovic applauds it. Fierce return serve from Del Potro, he leads 30-15. Slight chip over the net from Djokovic, Del Potro chases it but he fails to reach, allowing the Serb to take a 40-30 lead. Advantage Djokovic. Deuce! Advantage Del Potro. He wins it to trail 2-3 in the third set.

Defense like a BRICK WALL!@DjokerNole breaks Del Potro to go ahead in the 3rd set...#USOpen pic.twitter.com/Bxx6bwy5rs

When you find someone to cover your shift at Dunder Mifflin...

04:22 IST: Del Potro to serve,brilliant drop shot from Djokovicm it's 15-all in the second game of the third set. Djokovic's forehand finds the net, he trails 15-30 to Del Potro. Hold for Del Potro, it's level at 1-1, the third set.

04:15 IST: Both the players have disappeared to the locker room to take a break after 95 minutes of grueling action in the second set.Novak Djokovic to serve the first game of the third set. He is just one set away from clinching his 14th Grand Slam title.

03:59 IST: Second set tie-breaker,Djokovic leads 1-0. But Del Potro comes from behind to level it 1-1. Flat shot from Del Potro he takes a 2-1 lead. The Argentine plays a forehand long to extend it to 3-1. Del Potro nets it, he had it that shot at the speed of 105 miles/h 3-2 as it stand now. Djokovic brings it back to level terms 3-3. Djokovic has taken a 4-3 lead. Two hours and 14 minutes played. 4-all in the tie-breaker now. 5-4 to Djokovic, Del Potro under pressure has missed a few backhands here. Another crucial miss for Del Potro, Djokovic leads 6-4. He has got it 7-4 in the tie-breaker after 1 hour and 35 minutes of grueling tennis. Novak Djokovic has clinched two back-to-back sets.

03:50 IST: Del Potro to serve, he takes a 15-love lead.Hold for Del Potro as he leads the second set 6-5. Djokovic's final return serve was too heavy as Del Potro finds the winner. We head to the tie-breaker here.

03:47 IST: Novak Djokovic to serve, he takes a 15-love lead.Relatively quick hold from the Serb, his lead in the game is now cut short to 30-15. Del Potro's forehand finds the net, Djokovic takes 40-15 lead. Great hold for him, he equals the second set to 5-5.

And the award for best performance by a fan in a leading role goes to...

03:20 IST: Djokovic to serve, he take a 15-love lead.15 shot rally in the game before Djokovic takes the point but Del Potro plays a brilliant backhand long to make it 30-all. Break point for Del Potro. Fourth deuce in the game already. 14 minutes into the game already and we have the sixth deuce. Djokovic's forehand finds the net, can Del Potro take the break point now. 17 minutes played in the marathon game already. Now Del Potro nets it a backhand. 20 minutes in the game. Novak Djokovic puts the eighth game to bed. It's 4-4 in the second set.

03:16 IST: Del Potro working the momentum brilliantly!He has taken a 30-love lead before Djokovic plays a crafted return serve to make it 30-15. But Del Potro's serve is too good to earn him the hold and lead 4-3 lead in the second game.

03:09 IST: Brilliant forehand long from Del Portohe has equalised the game 30-all. Deuce! Advantage Del Potro. He takes the break point, it is 3-all in the second set now.

03:06 IST: Good hold from Del Potro.He takes the game to trail 2-3 in the second set. The backhand shot from Novak Djokovic was well judged by Del Potro, whose return shot allowed the Argentine take the game.

03:00 IST: Easy hold for Djokovic, he leads 3-1 in the second game.Forehand return from Djokovic came well initially as he took 40-15. Del Potro to serve the next game.

02:52 IST: 136 miles/hourthe speed of the return serve from Del Potro. But Djokovic plays a spectacular return serve to make it 30-all. Break point for Djokovic, he wins it to lead 2-1 in the second game.

02:49 IST: Djokovic leads 40-15,before he levels the second game 1-all. Del Potro moved inside the court, trying to play from near the net as Djokovic plays the shot in the exposed area to bring the set to level.

02:39 IST: Forehand long from Djokovic, he takes a 30-love lead against the serving Del Potro. Djokovic nets a backhand to allow Del Potro return in the game 15-30. Del Potro then earns a serve point to make it 30-30 and soon takes a 40-30 lead. Deuce! Del Potro takes the first set in the second game.

02:34 IST: Set Point!Novak Djokovic takes the first set which started on closely fought note 6-3. Del Potro made too many unforced errors. He nets a forehand to give Djokovic the lead in 42 minutes!

Will Del Potro fight his way back into the championship?#USOpen pic.twitter.com/0SZMqrEj8I

02:30 IST: Patience from Novak Djokovic in the long rally!Del Potro hits the net and allows Novak take a 5-3 lead in the first set.

02:29 IST: Del Potro leads 40-love.Pressure returns on Del Potro, who is serving and making unforced errors to make it 40-all.

02:23 IST: Strong hold from Novak Djokovic,he takes 4-3 lead in the first game which was completely dominated by the Serbian. He used his return serves to power!

02:20 IST: Novak Djokovic's return serve hits the net.Del Potro takes the game, it's 3-3 in the first set. Consecutive unforced errors from Djokovic costed him the game.

02:15 IST:Unforced errorfrom Del Potro as he hits the net. Djokovic then smashes a return pass to take the game. Djokovic leads 3-2 in the first set. 24 minutes played!

02:13 IST: Long rally on display now,Novak Djokovic hits the net to make it 15-all. Del Potro plays the return shot wide, way out of the line, helps Djokovic extend the lead to 30-15.

02:08 IST: What a forehand play from Del Potro,smashes the shot with power, Djokovic fails to pick it up. The Argentine takes 30-15 lead now. Poor return serve from Djokovic, will help Del Poto take 40-15 lead. Del Potro returns to make it 2-2 in the first game. Looks like we are set for a close contest with this one!

02:04 IST:Deuce in the third game of first set!Novak Djokovic takes advantage, he played the return serve way out of reach for Del Potro. Novak Djokovic leads 2-1 in the first set.

02:02 IST: 30-all in the third game of first set,but Djokovic sends Del Potro in the different direction and hits it on the other to take a 40-30 lead.

01:57 IST: Del Potro takes back to back serve point,leads 30-love. Novak plays a miscued shot, hits it way over the line to allow Del Potro level the first set to 1-1 in the second game.

01:55 IST: Novak Djokovic takes the first game, leads 1-0.Novak Djokovic again tried to come close to the net which exposed the back court, which Del Potro took to advantage and sliced the shot over the net.

01:52 IST: Break point Del Potro,love-15 he leads. But Novak Djokovic returns to make it 15-all. Djokovic then stepped closer to the net to play the shot and Del Potro smashed the return serve way out of the reach for the Serbian. Del Potro leads 40-15.

01:50 IST: The men are good to go!Novak Djokovic to takes the opening serve. Del Potro won the toss elected to receive first.

01:45 IST: The roof at the Arthur Ashe stadium is closed due to the rainy atmosphere outside.A loud cheer breaks out as Serbian Novak Djokovic and the Argentine Juan Martin Del Potro take the centre court. Both the players are undergoing the final warm-up before we get underway with this one.

01:30 IST: The women's doubles champions celebrate their win at the centre court.

01:25 IST: The US Open women's doubles have found their champion, we head on to the much awaited men's singles final now.

01:02 IST: Del Potro working out on his return serves during the warm-up session!

01:00 IST: Djokovic flexing his muscles before the final clash!

12:55 IST: Forehand service vs return serves will be on display tonight!

The owner of one of the biggest forehands will come up against one of the best returners when two former #USOpen champions battle for the final on Sunday...

12:30 IST: Hello and welcome to the live commentary from the US Open men's singles final between Juan Martin Del Potro and Novak Djokovic.

It was plain sailing for the 31-year-old Serb who is chasing a 14th Slam title to take him level with Pete Sampras on the all-time list.

He broke serve four times while an under-par Nishikori saved 13 of the 17 break points he faced and committed 51 unforced errors.

Juan Martin del Potro reached the US Open final on Friday after defending champion and world number one Rafael Nadal retired from their last-four clash with a knee injury.

Novak Djokovic Live Blogs Tennis
Get the latest updates on ICC T20 Worldcup 2022, check out the Schedule and Live Score. Like us on Facebook or follow us on Twitter for more sports updates. You can also download the NDTV Cricket app for Android or iOS.