US Open 2018: Maria Sharapova knocked Out By Carla Suarez Navarro In Fourth Round

Maria Sharapova was knocked out of the US Open in the fourth round on Monday, losing 6-4, 6-3 to Spanish birthday girl Carla Suarez Navarro. 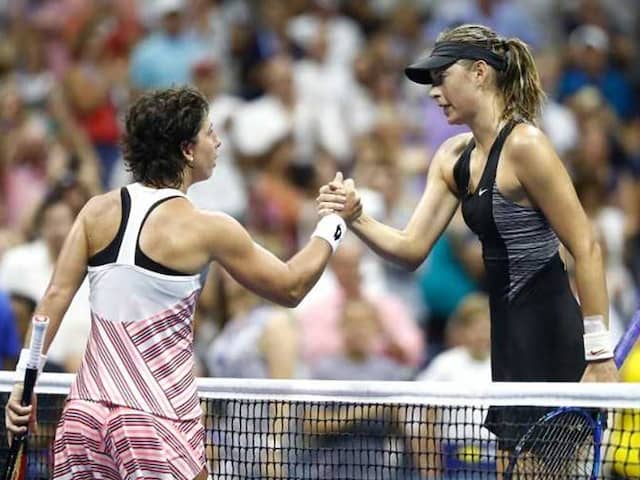 Maria Sharapova was knocked out of the US Open in the fourth round on Monday.© AFP

Maria Sharapova was knocked out of the US Open in the fourth round on Monday, losing 6-4, 6-3 to Spanish birthday girl Carla Suarez Navarro who inflicted the Russian's first ever night-time loss at the tournament. Sharapova, the 2006 champion who was trying to reach the quarter-finals for the first time since 2012, hit 38 unforced errors and dropped serve six times. The defeat ended the former world number one's perfect record of 23 wins -- 22 of them on Arthur Ashe Stadium -- in night sessions at Flushing Meadows.

Suarez Navarro, who celebrated her 30th birthday Monday, was a quarter-finalist in New York in 2013.

"Maria has played here at night many times so I knew I needed to be aggressive, focussed and play solid," said the 30th seeded Spaniard.

"I told myself to run and fight -- that's the way I can play really good tennis."

She will face 2017 runner-up Madison Keys for a place in the semi-finals.

"Madison is from the United States so I guess all the crowd will be for her.

"I have played her a few times. She has a great serve and plenty of experience on this court."

Sharapova, who won the last of her five Slams at Roland Garros in 2014, has endured a disappointing return to the majors since the end of her drugs ban in April of 2017.

She made the fourth round in New York last year, third round in Australia in January, quarter-finals in Paris before a first round exit at Wimbledon.

Her loss to Russia's Vitalia Diatchenko, the world number 132 at the time, at the All England Club was her first opening round Wimbledon defeat and earliest Grand Slam exit in eight years.

Comments
Topics mentioned in this article
Maria Sharapova Carla Suarez Navarro Tennis
Get the latest Cricket news, check out the India cricket schedule, Cricket live score . Like us on Facebook or follow us on Twitter for more sports updates. You can also download the NDTV Cricket app for Android or iOS.