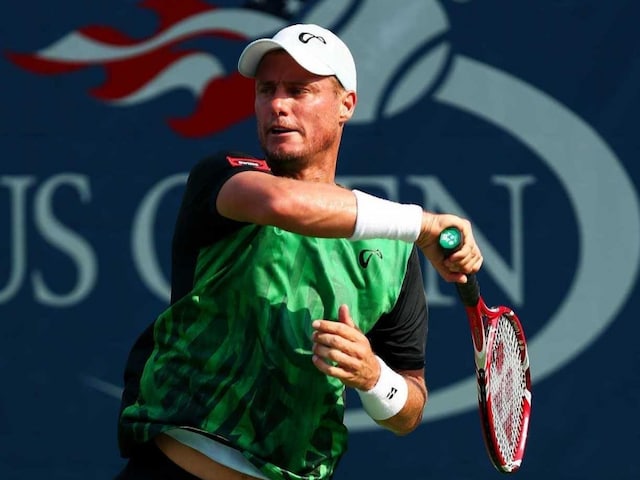 Lleyton Hewitt in action during US Open 2015 at Flushing Meadows.© AFP
New York:

Australia's Lleyton Hewitt has at least one more match to play on the US Open hardcourts where he became a Grand Slam champion. (Complete coverage of US Open 2015)

The 34-year-old, who will retire after January's Australian Open, advanced to the second round Tuesday at Flushing Meadows with a 6-0, 7-6 (7/2), 1-0 victory when Kazakh rival Aleksandr Nedovyesov retired after receiving right shoulder treatment. (Also read: Federer dominates | Wawrinka cruises | Kokkinakis gets the cramps)

That will put Hewitt against 24th-seeded countryman Bernard Tomic or Damir Dzumhur of Bosnia and Herzegovina on Thursday in his penultimate Grand Slam event.

Hewitt, who has fallen to 355th in the world rankings, won the 2001 US Open final over Pete Sampras and took the 2002 Wimbledon championship, downing David Nalbandian in the trophy match.

"It's hard to separate obviously the US Open and Wimbledon. US Open was my first Slam. But for me there was always something really special about Wimbledon," Hewitt said.

Wearing a shirt with the logo "NYC'mon One Last Time New York" embracing his famed on-court cry and his New York farewell, Hewitt also cited the joy of winning the 2003 Davis Cup at home in Melbourne and his becoming the youngest world number one at age 20 in 2001 at the year-end ATP Masters Cup in Sydney.

This year, he helped pull the Aussies, steeped in tradition from the days of Tony Roche and John Newcombe, from the brink of defeat and into a semi-final Davis Cup tie against Andy Murray-led Great Britain later this month at Glasgow.

"I was fortunate to come up at a time with Newk and Roche. They let me know what Davis Cup is about, especially playing for Australia," Hewitt said. "I've just tried to lead by example.

"Davis Cup for me has been a massive passion. It's the reason that I still played this year, because I feel like we had a good opportunity to do well and I could still add something to the Davis Cup team as a player this year."

It was a main reason he took a wildcard into the US Open this year.

"Could have gone to another Aussie but I felt like to give myself the best opportunity for the Davis Cup tie, it was the right decision," Hewitt said.

Hewitt named Andre Agassi, Roger Federer and Rafael Nadal as the players who really pushed him during his career, but said his best US Open memory was his final win over Sampras.

"Beating the greatest at the time, in the final, in his home Grand Slam -- the semifinal and final I felt invincible out there, didn't feel like I could miss a ball," Hewitt said.

"Pete hadn't dropped serve for something ridiculous going into the final. I remember sitting right here, everyone saying, You can't beat him, you can't break his serve. I just tried and I broke him first game. That gave me a lot of confidence."

Now Hewitt is set to call it quits just as Federer has moved to world number two at the same age. But that hasn't prompted any second guessing by Hewitt.

"He's obviously not struggling at the age of 34 out there. He's playing OK," Hewitt said.

"No, obviously everyone has to call 'time' at some stage. I'm very comfortable with how it's all panning out."

Comments
Topics mentioned in this article
Lleyton Hewitt Tennis
Get the latest Cricket news, check out the India cricket schedule, Cricket live score . Like us on Facebook or follow us on Twitter for more sports updates. You can also download the NDTV Cricket app for Android or iOS.