Peer pulls off another diplomatic coup

Shahar Peer, the first Israeli female athlete to compete in the United Arab Emirates, is making another piece of diplomatic history here this week. 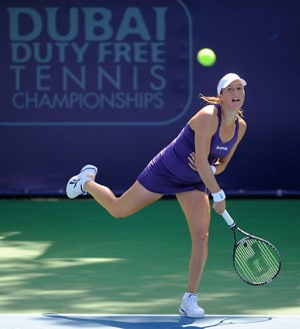 Shahar Peer, the first Israeli female athlete to compete in the United Arab Emirates, is making another piece of diplomatic history here this week.

Peer caused a political tremor two years ago when, after much wrangling and fiercely strict security arrangements, she was eventually allowed to enter the Dubai Open.

Her admission was preceded by a convoluted refusal to grant her a UAE visa in 2009; this year, by stunning contrast, Peer has actually been invited to take part in the tournament.

The offer indicates that her courage, persistence and inspirational on-court efforts, have become regarded as valuable pioneering ingredients in Arab-Israeli relations.

The invite came through a wild card entry, a Women's Tennis Association (WTA) regulation which permits tournaments to seek competitors who are unable to gain automatic acceptance through a high world ranking.

"I think it's an amazing gesture," Peer said. "It's not something that you just think is going to come naturally. So it's an overcome for them and I really appreciate it," she added, meaning that there were obstacles to overcome before the decision could be made.

Among them are the organisation of living, changing and dining facilities separate from other players, a designated and protected outside court for all of Peer's matches, bodyguards, and, in the past at least, snipers hidden in strategic locations.

"I really appreciate them coming forward and giving this to me," Peer added. "I think we're doing amazing things here in the last few years, so I think it's very good for everybody."

Her presence in Dubai has been good for both cultural and political progress in the Middle East, and excellent public relations for a possible Dubai Olympic bid in 2024. It has also been an inspiration for the player herself.

Peer's first year here, 2010, saw her produce some of the finest tennis of her career, with wins over Caroline Wozniacki and Li Na, and a run to the semi-final halted only by an in-form Venus Williams.

Last year Peer again found that the special atmosphere of her visit helped her raise her game, taking her to the quarter-finals before this time losing to Wozniacki.

She was asked whether her courageous appearances had had a big impact back home. "Actually they talk all the time - it doesn't matter whether I'm here or not," answered the Jerusalem-born pioneer.

"Obviously it's also a big thing for us as Israelis, what I've been doing here the last few years, so they really support and appreciate it. They're always putting it in the news," Peer said.

"I think 2010 was one of the top two or three tournaments ever for me. I also played really well at the Australian Open when I got to the quarters. But I played some of my best tennis here. I've beaten two top 10 players and two other top 20 players so it has been an amazing week for me."

This year though Peer may find it hard to get beyond the second round. Although she won her opening match soundly, overcoming Fatma Al Nabhani from Oman by 6-3, 6-1, she next faces an exceptionally tough opponent.

That is the fifth-seeded Agnieszka Radwanska, the resilient, tactically astute Polish player who came from 3-5 down in the final set to beat Amanda Wozniak of Canada 6-1, 6-7 (6/8), 7-5, and whose recent form suggests she is capable of pushing towards the very top.

Comments
Topics mentioned in this article
Tennis Caroline Wozniacki Andy Murray Victoria Azarenka Petra Kvitova Shahar Peer Kateryna Bondarenko
Get the latest updates on India vs Australia Series, check out the India vs Australia Schedule for 2020-21 and Ind vs Aus live score . Like us on Facebook or follow us on Twitter for more sports updates. You can also download the NDTV Cricket app for Android or iOS.