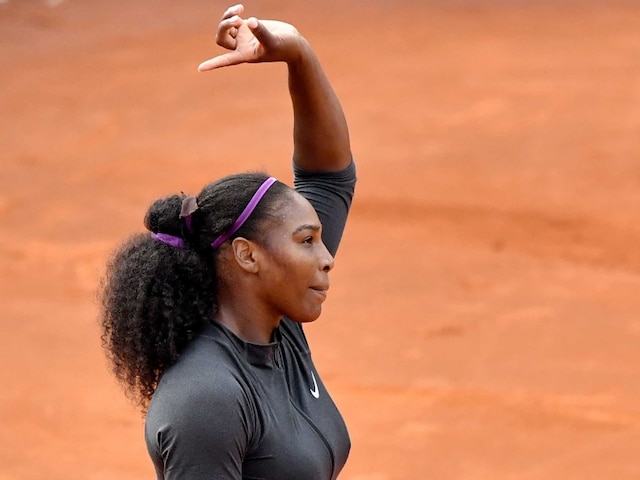 Three-time champion Serena Williams said she can't wait after setting up the first all-American women's claycourt final in 14 years, with an Italian Open final against Madison Keys on Sunday.

The last time two Americans faced off in the final of a WTA claycourt event was in 2002, when Williams beat her older sister Venus to win her maiden French Open at Roland Garros.

Williams, who will aim for her fourth and second successive title in Paris in a fortnight, said earlier this week she was excited to see a new crop of younger Americans emerging from her shadow.

And she is now looking forward to meeting 21-year-old Keys after she upset Spain's third seed Garbine Muguruza 7-6 (7/5), 6-4 earlier in the day.

"Yeah, it's great. I think it will be wonderful because I feel like Madison is one of the players that really can be great and she has that potential, and now she's showing that on all surfaces," said Williams.

"You know, we're an all-American final on the clay. That's just -- it's great. It's really exciting."

Despite Rome being Williams' first event of the season, the French Open champion booked her final spot with a comfortable 6-4, 6-1 semi-final win over Romanian Irina-Camelia Begu on Saturday as she looks for a fourth crown in the Eternal City.

"I feel like everything is kind of coming together," said Williams.

The 34-year-old American has won three titles in the Italian capital, in 2002, 2013 and 2014 and she pulled out of the tournament last year with an elbow injury after his first match.

Speaking before Williams won her semi-final, Keys admitted "it would mean a lot for me" to be facing Williams for the third time in her career.

"If it's Serena, I'm going to go out and do my best. You know, I'm really excited for it," she said.

Williams has beaten Keys twice, both times during Grand Slams.

But Keys said she won't be bowing to her more successful and more experienced compatriot.

"I played her pretty close the first set of the Australian Open. So (it) definitely made me realise that I can stay in it," she said.

"I think if you're kind of able to weather the storm and stay with her, that, you know, every once in a while you get one or two opportunities and it's (all about) taking those opportunities."

After many of the top women's seeds exited the tournament prematurely, a Keys win would add spice to a women's tournament that is so often overshadowed by the men's Rome Masters at Foro Italico.

But Williams remains the big favourite, and although she offered encouragement to Keys she warned she won't be going out to lose.

"One thing I have learned is that Madison gets better every time, and that's great because when you play people, especially when they're young like her and the future of American tennis, it's so good to see them get better," said Williams.

"So for me it's just (about) trying to do the same thing, even though I'm a little older, just to get better and to be ready for her and to do the best that I can."

Comments
Topics mentioned in this article
Serena Williams Madison Keys Tennis
Get the latest Cricket news, check out the India cricket schedule, Cricket live score . Like us on Facebook or follow us on Twitter for more sports updates. You can also download the NDTV Cricket app for Android or iOS.