Despite losing the second set 0-6, Serena Williams withstood a sterling effort from 30-year-old wildcard Anabel Medina Garrigues to book her place in the Madrid Open semi-finals. 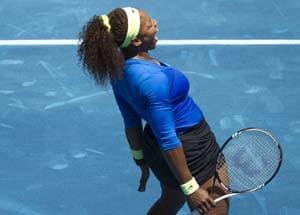 World number one Serena Williams withstood a sterling effort from 30-year-old wildcard Anabel Medina Garrigues to book her place in the Madrid Open semi-finals with a 6-3, 0-6, 7-5 victory on Friday.

Williams had cruised through to the last eight without so much as dropping a set and she did enough to edge a tight opening set against the World No. 63 with just the one break of serve when Garrgues was serving at 3-4 down.

However, it was the Spaniard who blew Williams away in the second as she charged into the 15-time Grand Slam winner's serve to break three times and was never under any pressure on her own serve as she amazingly took the set 6-0.

Williams appeared to have regained control early in the third as she got off to a 2-0 lead, but Garrigues came soaring back again and broke in successive games to move ahead 4-2.

With victory in sight though, Garrigues faltered as she gifted the break straight back before the next three games went with serve.

And Williams made the final and decisive break when she pounced on a weak second serve to power a backhand down the line and go 6-5 in front before holding to love to set up a semi-final meeting with Sara Errani or Ekaterina Makarova.