Though she and her partner Cara Black could not go past the quarterfinals of French Open 2014, Sania Mirza has achieved her career-best ranking of six in women's doubles thanks to her consistent performances. 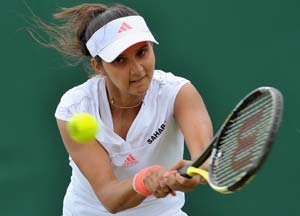 Touching a new high, India's tennis ace Sania Mirza on Monday became world number six in doubles, her career-best ranking, as the new chart was released following the conclusion of the French Open.

Sania and Cara had lost to eventual champions Shuai Peng and Su-Wei Hsieh.

"When I started the season this year in January, one of my goals was to better my career-best world ranking. I am happy to have achieved this today," Sania said from Birmingham, where she is gearing up for the grass court season, leading up to the Wimbledon championships.

Sania's father and coach Imran Mirza said,"Sania has played very consistently this season and has been rewarded. I believe she has the potential to go further."