Rohan Bopanna has confirmed his partnership with American Rajeev Ram for the next ATP season, the move comes in the wake of Mahesh Bhupathi-Bopanna combine deciding to part ways. 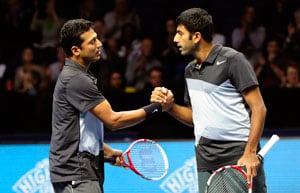 Rohan Bopanna has confirmed his partnership with American Rajeev Ram for the next ATP season, the move comes in the wake of Mahesh Bhupathi-Bopanna combine deciding to part ways.

While Bhupathi will be partnering Canadian Daniel Nestor, Bopanna will be seen pairing up with long-time friend Rajeev on the ATP circuit next year.

The duo has a combined experience of 17 years on the professional circuit.

"Rohan and Rajeev had decided a few months ago to combine forces to make what they believe an extremely formidable partnership, given their complementary styles of play and strong service games," a release from Play Right, the firm which manages Bopanna, stated on Tuesday.

Bopanna had a successful year with Bhupathi, which included two titles at Dubai and Paris and runner-up finish at the just-concluded season-ending London Masters.

He also attained his career-best ranking of eight in March this year.

"I played with Mahesh in 2012 with a special focus on preparing for the London Olympics and now that it's over, I want to concentrate on the ATP circuit and I am eager to build a strong, sustainable partnership," Bopanna said about his decision.

"Rajeev is a great player and given our individual strengths, and his command of the deuce court, I believe that we can complement each other very well on the court," he added.

The duo had earlier made an appearance as a team at the Australian Open in 2008, where as an unseeded combination they proceeded to the pre-quarters defeating higher ranked teams along the way.

With a career best doubles ranking of 33, Rajeev has maintained a fine balance between the singles and doubles circuits.

The 28-year-old, however, has limited his singles appearances in the last couple of years and is concentrating more on the doubles game.

Rajeev earlier this year in September won the St Petersburg Open along with Nenad Zimonjic. 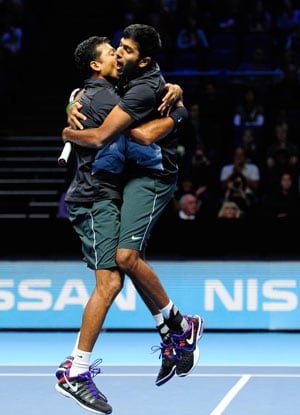 "I am very excited to play with Rohan in 2013. He is not only one of the best doubles players in the world but also a good friend. It is a great opportunity for me and I am looking forward to it," Rajeev said.

With a total of 14 ATP doubles titles between them, Rohan and Rajeev are looking to recapture the magic in 2013.

"2012 has been a good season for both of us and we hope to continue the momentum into 2013. However, we really want to focus on one match at a time," said Bopanna.

His new partner was, though, was in no mood to look too far ahead.

"Looking at the first month of the year, there are two big events in Chennai and the Australian Open so there is no need to look any further than that," Rajeev pointed.

"We haven't played together since Australia in 2008 so it has been a while. I just hope to continuously improve so that we can reach our full potential," he added.

The newly-formed combination will open their campaign in 2013 at the Chennai Open, where Rajeev won the title in 2009 partnering Eric Butorac.

Comments
Topics mentioned in this article
Tennis Daniel Nestor Aisam-Ul-Haq Qureshi Rajeev Ram Rohan Bopanna Su-Wei Hsieh
Get the latest updates on IPL 2020, check out the IPL Schedule for 2020 and Indian Premier League (IPL) Cricket live score . Like us on Facebook or follow us on Twitter for more sports updates. You can also download the NDTV Cricket app for Android or iOS.