The eighth seeded pair of Rohan Bopanna and Florin Mergea overcame Mike and Bob Bryan in just an hour to start their World Tour Finals on a high. 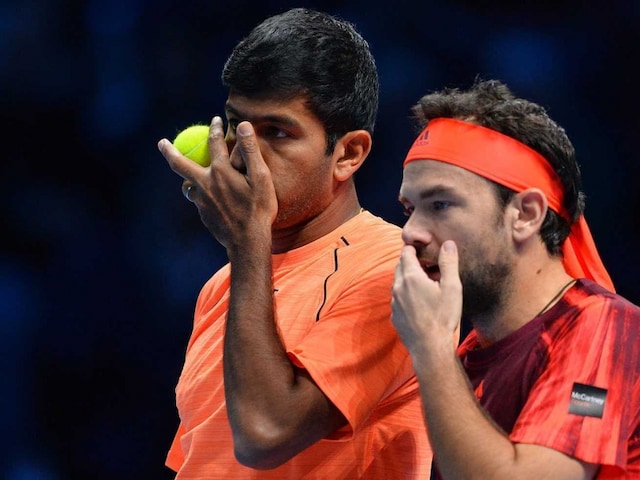 Making their debut as a team at the prestigious $7 million ATP World Tour Finals, the Indo-Romanian tennis combine of Rohan Bopanna and Florin Mergea came out with a brilliant performance to drub top seeds and defending champions Bob and Mike Bryan in straight sets in their men's doubles opening rubber of Group Ashe/Smith.(Djokovic, Federer Strong Starts)

The eighth seeded pairing took exactly an hour to defeat the legendary American pair 6-4, 6-3 in the round robin encounter at The O2 Arena here on Sunday night. This was the winning pair's second win in four meetings over the Bryan brothers and their first on a hard court.

The last time they beat the Bryans was in the quarter-finals of Wimbledon earlier this year, where they earned a four-set triumph.

A series of breaks saw the two pairs go neck-and-neck in the opening set until Bopanna held on in the 10th game to take the set 6-4. Both pairs received five breakpoints each but Bopanna and Mergea converted three to the two of the Bryans.

The second set was more or less an easy task for the eighth seeds as the combination broke early and led 2-0. The Indo-Romanian pair, from there on, did not look back and piled on more pressure on their opponents.

A couple of unforced errors from the American duo and two vital break points helped Bopanna-Mergea seal a memorable win.

Bopanna and Mergea are currently topping the four-team group and will next face British-Australian fourth seeds Jamie Murray and John Peers, who defeated Italian fifth seeds Simone Bolelli and Fabio Fognini 7-6(5), 3-6, 11-9, on Tuesday.

The tournament is a year-ending event where only the top-8 players/pairs can take part. It is the most prestigious event in the tennis calendar after the four Grand Slam tourneys.

Comments
Topics mentioned in this article
Rohan Bopanna Florin Mergea Mike Bryan Bob Bryan Tennis
Get the latest Cricket news, check out the India cricket schedule, Cricket live score . Like us on Facebook or follow us on Twitter for more sports updates. You can also download the NDTV Cricket app for Android or iOS.