It was eighth ATP doubles title for Bopanna, who has been ignored for India's Davis Cup tie against Indonesia. 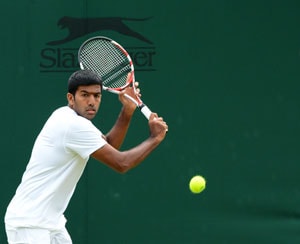 Rohan Bopanna won his first title of the season when he combined with Colin Fleming to claim the ATP Open 13 doubles trophy with a straight-sets win over Aisam-ul-haq Qureshi and Jeal-Julien Rojer, on Sunday.

Bopanna played with Fleming in the absence of regular partner Rajeev Ram.

The second seeds saved all the four breakpoints they faced in the match before prevailing in the second-set tie-breaker.

It was eighth ATP doubles title for Bopanna, who has been ignored for India's Davis Cup tie against Indonesia.

Bopanna and Fleming shared euro 29,000 as prize money and earned 250 ranking points each.

Comments
Topics mentioned in this article
Tennis Aisam-Ul-Haq Qureshi Colin Fleming Jean-Julien Rojer Rajeev Ram Rohan Bopanna Su-Wei Hsieh
Get the latest Cricket news, check out the India cricket schedule, Cricket live score . Like us on Facebook or follow us on Twitter for more sports updates. You can also download the NDTV Cricket app for Android or iOS.