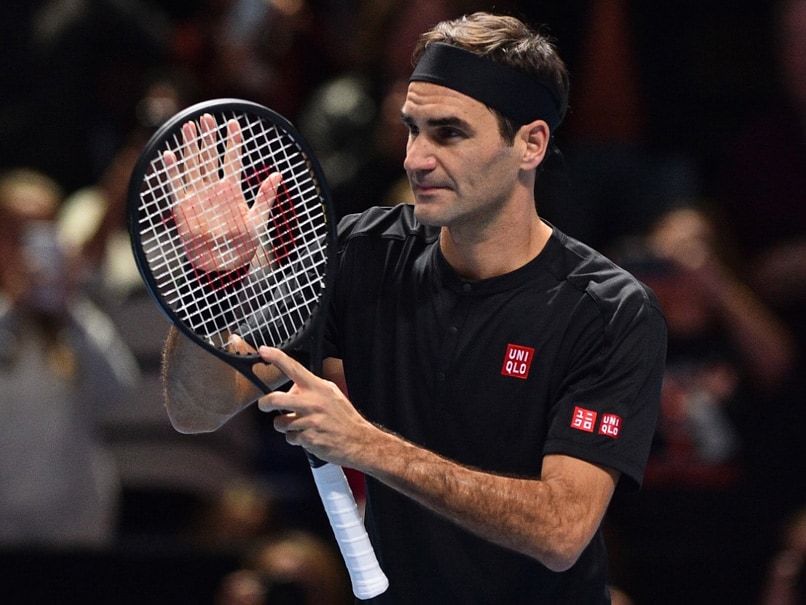 Roger Federer had lost his first match on Sunday in straight sets to Dominic Thiem.© AFP

Roger Federer said he had "flushed away" the pain of his defeat in the Wimbledon final as he prepares for a rematch against Novak Djokovic after keeping alive his hopes of a seventh ATP Finals crown on Tuesday. The Swiss put himself back into the mix at the end-of-season event with 7-6 (7/2), 6-3 win against Italian debutant Matteo Berrettini. The third seed had put himself under enormous pressure by losing his first round-robin match in Group Bjorn Borg on Sunday to Dominic Thiem.

The six-time champion was not at his fluent best on Tuesday but ultimately had too much for his Italian opponent, who had won just three games against Djokovic in his opener.

If Austrian fifth seed Thiem beats Djokovic in the evening match, he would seal one of the two semi-final spots in the group, leaving the others to scrap it out for the second.

Federer, 38, will face the Serbian second seed on Thursday in a repeat of July's marathon Wimbledon final, during which he squandered two championship points on his own serve.

The Swiss was asked after his win against Berrettini whether that defeat had left emotional or mental scars.

"We'll find out, but I think it's all flushed away from my side," said Federer, who added that it had taken him two weeks at most to get over the loss.

"A lot of water has gone under the bridge since then.

He added: "Actually, it's good for me to play him again, and maybe that all helps to get a chance to get him back or whatever it is, but at the end of the day, I'm here for the World Tour Finals and not because of the Wimbledon finals."

Both Federer and eighth seed Berrettini were solid on serve in the first set of their contest.

The Swiss eventually earned himself the sniff of a chance in the 12th game, winning the first break point of the match but Berrettini snuffed out the danger and held to take it into a tie-break.

Federer upped the level of his game in the shootout, helped by some wayward shots from his opponent plus a Berrettini double-fault and won it comfortably 7-2.

The Swiss, clad in black, broke immediately at the start of the second set to leave the Italian with a mountain to climb.

Berrettini earned a clutch of break points in the eighth game but Federer eventually served himself out of trouble.

Federer, as usual enjoying the lion's share of support from the crowd, broke in the next game to seal the set 6-3.

Djokovic is hunting a sixth ATP Finals title to pull level with Federer's record and is also seeking to pip Rafael Nadal to the year-end number one ranking.

Comments
Topics mentioned in this article
Roger Federer Tennis
Get the latest updates on IND vs NZ 2021, check out the Schedule and Live Score . Like us on Facebook or follow us on Twitter for more sports updates. You can also download the NDTV Cricket app for Android or iOS.