Rafael Nadal through to doubles semi-final in Chile

The former No. 1-ranked Nadal moved easily around the court, showing no signs his left knee was bothering him. 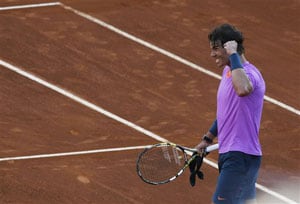 Rafael Nadal's knee held up for a third straight day as he won a doubles match at the VTR Open on Thursday, and he will get twice the workout on Friday.

The Spaniard teamed with Juan Monaco to reach the doubles semifinals with a 6-2, 7-6 (4) victory over Guillaume Ruffin and Filippo Volandri; his third match in three days after being away from the game for seven months with an ailing left knee and a stomach virus.

Nadal will play fellow Spaniard Daniel Gimeno-Traver in the singles quarterfinals on Friday, and is scheduled to play later the same day in doubles with Monaco against Argentines Carlos Berlocq and Leonardo Mayer.

This is exactly the type of test he'd been looking for as he tries to get his body back up to the level where he can challenge the likes of Novak Djokovic, Roger Federer and Andy Murray again.

Nadal and Monaco addressed the crowd on the court after winning, but skipped a news conference, having done four since arriving in Chile.

"I'm very happy to play again and enjoy things here in Chile," Nadal said. "It's a real pleasure playing with a friend."

Standing alongside, Monaco added: "I'm happy to be able to help at his side."

The former No. 1-ranked Nadal moved easily around the court, showing no signs his left knee was bothering him.

"He's not worried in a negative way," he added. "What he cares about is to be healthy and be ready to be competitive at every level he plays and to be at the same level as he was playing before."

Nadal has said it may take months to get back to that level and, despite winning seven French Open titles, he said he feels like that event in May is still "light years" away.

Nadal won his last of eight doubles titles last year with Mark Lopez in Indian Wells. He has won 50 titles in singles - 11 in Grand Slams.

Nadal is being treated like a rock star in Chile, where he had never played until this week. News stories have turned up some distant relatives in the South American country, and papers are picking up every flattering word he says.

"I feel like just another Chilean," he said Wednesday - a quote that showed up in the headlines of several Chilean newspapers.

Comments
Topics mentioned in this article
Tennis Rafael Nadal Juan Monaco Filippo Volandri
Get the latest Cricket news, check out the India cricket schedule, Cricket live score . Like us on Facebook or follow us on Twitter for more sports updates. You can also download the NDTV Cricket app for Android or iOS.