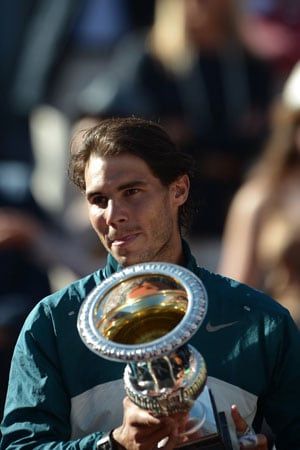 Spain's Rafael Nadal dominated his 30th meeting with Swiss rival Roger Federer to secure his seventh title in nine years at the Rome Masters on Sunday.

Nadal started the event seeded only fifth after losing many of his ATP ranking points during a seven-month absence from the sport.

However the Spaniard, winning his sixth title from eight finals so far this season, showed he is back to his best on his preferred surface with a masterclass which should boost his hopes of extending his record French Open tally to eight wins at Roland Garros next week.

Federer, the second seed, had overcome French upstart Benoit Paire in a late semi-final on Saturday to make his first final of the season.

But despite winning the opening game on serve the Swiss failed to really get a grip on the match.

In all, the Swiss finished with 32 unforced errors to Nadal's eight.

Nadal clinically broke the Swiss twice on his way to a 6-1 first set score inside 23 minutes.

Federer put up more resistance in the second but despite breaking back to 5-2 in the seventh game, and then holding serve to close to 5-3, Nadal brought up three championship points in the ninth game and required only one to seal the match with a cross-court forehand winner.

Nadal now has 24 Masters titles in a career total of 56.