Pironkova, Peer lose in 1st round in Budapest

Anna Tatishvili of Georgia upset third-seeded Tsvetana Pironkova of Bulgaria 1-6, 6-3, 6-1 Monday in the first round of the Budapest Grand Prix. 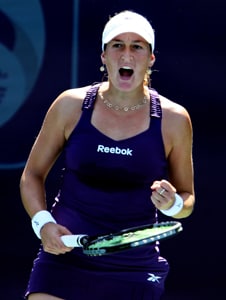 Anna Tatishvili of Georgia upset third-seeded Tsvetana Pironkova of Bulgaria 1-6, 6-3, 6-1 Monday in the first round of the Budapest Grand Prix.

Pironkova broke twice to comfortably win the first set before Tatishvili turned the match around. The 81st-ranked Georgian took a 4-1 lead in the second set and then broke three times in the third to clinch the match.

Seventh-seeded Shahar Peer of Israel was also eliminated after losing 6-4, 6-3 to Aleksandra Wozniak of Canada.

American Varvara Lepchenko had to retire with a right ankle injury when trailing 5-0 in the first set against Russia's Elena Vesnina.

Comments
Topics mentioned in this article
Tennis Vera Zvonareva Tsvetana Pironkova Shahar Peer Kateryna Bondarenko Hungarian Grand Prix
Get the latest updates on India vs Australia Series, check out the India vs Australia Schedule for 2020-21 and Ind vs Aus live score . Like us on Facebook or follow us on Twitter for more sports updates. You can also download the NDTV Cricket app for Android or iOS.