Wayne Odesnik, banned after admitting he brought  (HGH) to Australia, was a loser on Wednesday in his first ATP appearance since last April at the $1.4 million Washington Classic. 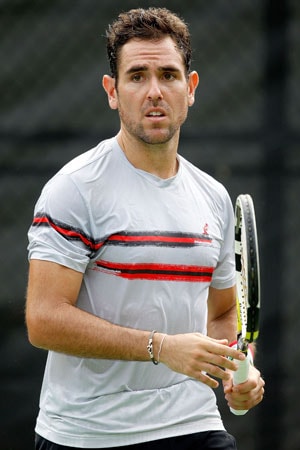 Wayne Odesnik, banned after admitting he brought human growth hormone (HGH) to Australia, was a loser on Wednesday in his first ATP appearance since last April at the $1.4 million Washington Classic.

Czech , ranked 54th in the world, bounced the 25-year-old South African-born American left-hander 6-1, 6-1 in 57 minutes to reach the third round of the hardcourt event, a tuneup tournament for the US Open.

Odesnik made his first ATP main draw since the ban as a lucky loser with a first-round bye after US second seed Mardy Fish, ranked eighth in the world, withdrew on Monday with a bruised right heel.

Odesnik held serve to open the match just before rain showers halted play. Stepanek won the next 11 games when the match resumed before Odesnik showed his best form, hitting three winners in a row and holding at love.

Stepanek held again, ending the match on a service winner. He allowed Odesnik only 19 points in the match.

Stepanek won their only prior meeting last year in a Brisbane quarter-final. Odesnik played through April of last year, losing a US Clay Court Championships semi-final to American Sam Querrey in his last ATP match before the ban.

Odesnik, arrested in January of 2010 in Brisbane with eight vials of HGH, pleaded guilty to bringing the banned performance-enhancing substance into Australia but denied taking HGH. He has never tested positive for the drug.

In May 2010, Odesnik was banned for two years, with the ban backdated to the prior December. He lost all ranking points after reaching a career-high 77th.

The International Tennis Federation later cut Odesnik's ban to one year after he cooperated with the group's anti-doping program and in January he began rebuilding his ranking in low-level events to now stand 161st in the world.

Comments
Topics mentioned in this article
Tennis Robert Kendrick Radek Stepanek Wayne Odesnik
Get the latest updates on IPL 2020, check out the IPL Schedule for 2020 and Indian Premier League (IPL) Cricket live score . Like us on Facebook or follow us on Twitter for more sports updates. You can also download the NDTV Cricket app for Android or iOS.