Novak Djokovic Wins Shanghai Masters To Close In On Rafael Nadal's No.1 Ranking

Novak Djokovic has now been victorious in 18 ATP matches in a row and in recent months won Wimbledon, the Cincinnati Masters, the US Open and now Shanghai for a fourth time. 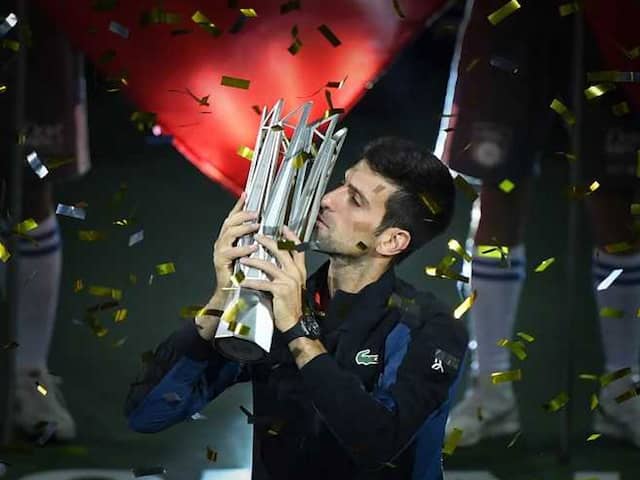 The "new" Novak Djokovic warned that he was gunning for Rafael Nadal's world number one ranking after winning the Shanghai Masters with a 6-3, 6-4 victory over Borna Coric on Sunday. The 14-time Grand Slam champion has been imperious all week and barely offered a sniff to the 19th-ranked Croatian, a good friend and sometime-training partner. The end when it inevitably arrived was anti-climactic, with the Serb winning the championship point after a video review. Djokovic buried his head in his hand at the absurdity of it.

The 31-year-old will leapfrog Roger Federer into second in the world when the rankings are released on Monday but will not stop there as the season reaches its climax.

Spanish great Nadal, who was not in Shanghai or Beijing last week because of a knee injury, will be just 215 points ahead of Djokovic in the race to finish as year-end number one.

"I could not ask for a better scenario," Djokovic, who last sat atop the rankings two years ago, said of his late surge to the summit of men's tennis.

"I am very close now to Nadal in the rankings and put myself in a good position for the last period of the year."

Red-hot Djokovic has now been victorious in 18 ATP matches in a row and in recent months won Wimbledon, the Cincinnati Masters, the US Open and now Shanghai for a fourth time.

It is all a far cry from just five months ago when Djokovic fell to 22nd in the world as he struggled following elbow surgery in February.

He missed the second half of 2017 with elbow and off-court issues but said he had adapted his game since the operation.

Djokovic, who has been particularly dominant on his serve, not dropping one service game in Shanghai, said: "I think you're seeing the new Novak.

"I don't need to describe him, that's all I can say.

"I had to reinvent myself and find, you know, (a) proper formula for success.

"I found it and I'm just trying to hold on to it as long as I can."

Asked by AFP if he had a message for the under-pressure Nadal, the Serb smiled: "I will leave that up to your creative spirit of journalism."

The 32-year-old Nadal could return from his latest injury for the Paris Masters, which starts at the end of this month.

Djokovic said he could play Vienna or Basel, the week before Paris, in an effort to further rein in his rankings rival.

The 21-year-old Coric said that he had no complaints about losing to "one of the best in the history of tennis".

In what was the biggest match of his life, he wore heavy strapping on one thigh and has been troubled by a stiff neck that saw him ponder pulling out before the tournament.

But he refused to blame those for defeat to the man he considers something of an idol.

"He was the much better player on the court. I was playing good, really, I was really happy how I played," he said.

"I felt even if I was serving a little bit better, he'd still return my serves, so there is nothing I can do."

Coric, the 13th seed, was chasing only the third title of his career and defeated top seed Federer in the semi-finals to underline his rich promise.

Novak Djokovic Borna Coric Rafael Nadal Roger Federer Tennis
Get the latest Cricket news, check out the India cricket schedule, Cricket live score . Like us on Facebook or follow us on Twitter for more sports updates. You can also download the NDTV Cricket app for Android or iOS.