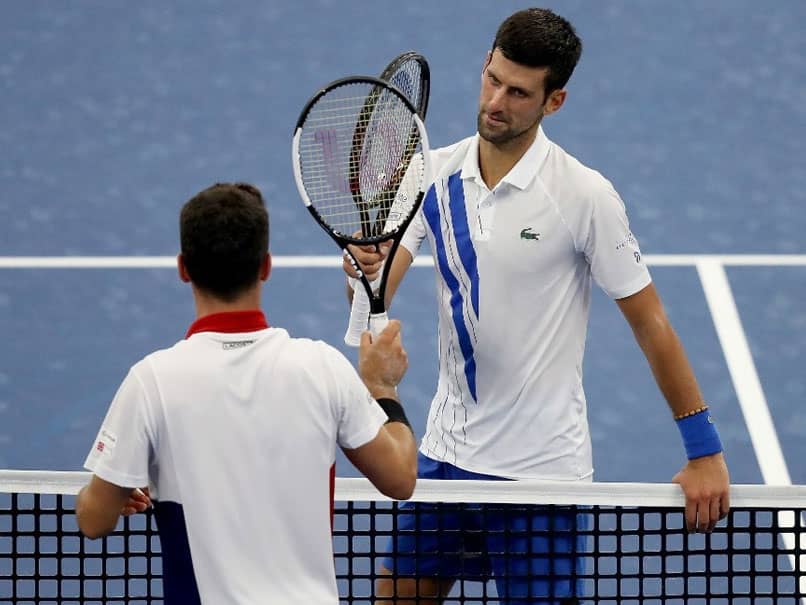 Novak Djokovic battled into the Western and Southern Open final despite a neck problem.© AFP

World number one Novak Djokovic battled into the ATP and WTA Western & Southern Open final Friday despite a neck problem while Japan's Naomi Osaka shook off stress to advance as well. Djokovic was treated twice by a trainer for neck issues but rallied to defeat Spanish eighth seed Roberto Bautista Agut 4-6, 6-4, 7-6 (7/0) in the New York COVID-19 quarantine bubble where the US Open begins Monday. The 33-year-old Serbian improved to 22-0 this year despite surrendering three breaks in the third set of the three-hour marathon.

He will face Milos Raonic in Saturday's final after the Canadian, 0-10 all-time against Djokovic, eliminated Greek fourth seed Stefanos Tsitsipas 7-6 (7/5), 6-3.

Fourth-seeded Osaka won a semi-final match she once vowed not to play, saving 18-of-21 break points to beat Belgium's Elise Mertens 6-2, 7-6 (7/5) and reach Saturday's final.

Two-time Grand Slam champion Osaka on Wednesday initially withdrew from her semi-final as a protest for the police shooting of Jacob Blake in Kenosha, Wisconsin.

But when the ATP and WTA followed her lead and postponed all semi-finals to Friday, she changed her mind and played.

"I just wanted to create awareness in the tennis bubble," she said. "I think I did my job."

The US Open tuneup is usually played in Cincinnati but was moved in the wake of the deadly virus outbreak.

Djokovic, winner of five of the past seven Grand Slam events including the Australian Open, had the trainer work on his neck at 2-1 up in the second set, then broke and held for a 4-2 edge.

Bautista Agut hit a forehand volley winner off a Djokovic drop shot to break back in the seventh game.

Djokovic had more treatment, rested as the roof was closed to avoid rain at Louis Armstrong Stadium, then broke Bautista Agut to force a third set when the Spaniard sent a backhand long.

Djokovic sent a forehand long to fall behind 2-1 but broke back in the fourth and again in the sixth on a brilliant backhand lob winner on the way to a 5-2 edge.

Serving for the match in the ninth game, Djokovic was broken at love as Bautista Agut fought back. The Spaniard broke again in the 11th game when Djokovic netted a forehand but gave back the break in the 12th game by sending a forehand long to force a tie-breaker which Djokovic swept, aided by his 13th and 14th aces of the match.

"That was a strange match. I don't know how I won. He was the better player," said the world number one.

Osaka, of Haitian and Japanese heritage, said she was "sick to her stomach" and "exhausted" by repeated violence against blacks by US police, echoing a move by the NBA Milwaukee Bucks in boycotting a playoff game for the same reason.

"I honestly didn't even think it would be that big of a deal," Osaka said Friday.

"I always thought it would be nice if someone started in tennis. I'm more of a follower. I was waiting and waiting and then I realized I was the one who was going to have to take the first step."

Osaka, 22, said her big personal gains from the move were "confidence and really becoming more aware of the impact my voice could have."

But she was worried how other players would react.

"I don't want them to blame me for the one-day break because their schedule got messed up," she said.

"I was scared but they were really nice."

Mertens was supportive of Osaka and unfazed by the off-again, on-again status of the match.

"I totally get her reason 100% so I'm totally supporting her too," Mertens said.

She broke for a 2-0 lead in set two before Mertens rolled through the next four games. Osaka broke back in the seventh game and, after battling into the tie-breaker, won when Mertens hit a backhand wide.

Raonic commended Osaka's move, saying, "It's a human right not to have that fear. I hope there is a change in the future and that we as athletes can be a small part of that."

Novak Djokovic Naomi Osaka Roberto Bautista Agut Tennis
Get the latest updates on IPL 2021, IPL Points Table , IPL Schedule 2021 , live score . Like us on Facebook or follow us on Twitter for more sports updates. You can also download the NDTV Cricket app for Android or iOS.