Nadal is noble in defeat

So, Rafael Nadal won't win four Grand Slam tournaments in a row, which saves us from the ridiculous debate over that accomplishment compared to a real Grand Slam, accomplished in one calendar year. 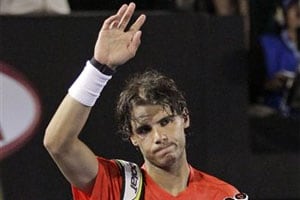 Because not only would Nadal not drop out of his quarterfinal against his fellow Spaniard David Ferrer ("I hate retirements," he said), he wouldn't talk about the injury that so clearly hampered him. And to respect Ferrer's victory, Nadal asked reporters not to ask him about it. He lamented his string of injuries because they sound like excuses. This was all worth marveling at and appreciating, writes Greg Couch on Fanhouse.com, because it's something so beautiful and so rare. In sports, we're talking spotted owl rare.

(Avoid gratuitous comparisons to Bears quarterback Jay Cutler because their situations are not at all comparable, other than suggesting Cutler could take a few lessons in public relations from the gracious Nadal.)

Ferrer was nearly as gracious in victory, saying a healthy Nadal wins that match in straight sets. But injuries, it seems, are the price Nadal pays for his relentless game. As Ravi Ubha writes on ESPN.com, they keep interrupting whatever momentum he creates. Right now, they are costing tennis another showdown between Nadal and Roger Federer, who maintains his role as the healthy half of the rivalry.

Rivalries are healthy and thriving in college basketball these days as the season races toward tournament season. On a serious upswing is No. 1 Ohio State, which has people like Paul Daugherty of SI.com starting to consider the Buckeyes unbeatable. (Wait, wasn't Duke unbeatable up until getting beat?) Jeff Goodman of Foxsports.com sees comparisons to the back-to-back national champion Florida team. The real unstoppable force this season, though, seems to be Brigham Young's Jimmer Fredette, although Luke Winn of SI.com proposes some ways to slow him down.

On the downswing side of things, Syracuse finds its confidence reeling after a third straight loss, writes Bud Poliquin of The Syracuse Post Standard, and Michigan State is descending into something resembling chaos after kicking Korie Lucious off the team. Last year's N.C.A.A. tournament underdog for the ages, Butler, is having a much tougher time of it this season, too.

None of that approaches the real-life heartbreaking story of Kansas's Thomas Robinson, who is mourning the death of his mother and two grandparents.

Real life interrupted some Iowa football workouts, with 12 Hawkeyes landing in the hospital with what The Cedar Rapids Gazette called "an exertional condition."

There is a more uplifting football story by Jon Wertheim of SI.com on Terry Harrington, whose 25-year wrongful imprisonment did not dampen his love for the sport and he now coaches children in Omaha.

Hockey pauses today to notice that Wayne Gretzky is turning 50, as good a reason as any to look back at his remarkable career. And you might notice some remarkable feats by a rookie in Philadelphia, the 22-year-old goalie Sergei Bobrovski, but as Nicholas Cotsonika writes on Yahoo.com, you can just call him Bob.

As for Rafael Nadal, you can just call him Rafa and hope a little of him rubs off on everyone else.

Comments
Topics mentioned in this article
Tennis Rafael Nadal Petra Kvitova
Get the latest Cricket news, check out the India cricket schedule, Cricket live score . Like us on Facebook or follow us on Twitter for more sports updates. You can also download the NDTV Cricket app for Android or iOS.