Nadal back after injury, fit for Davis Cup

Rafael Nadal is ready for a return to top-level tennis, declaring himself 100 percent fit on Tuesday after fully recovering from a thigh injury sustained at the Australian Open. 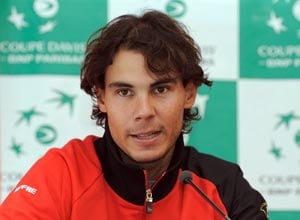 Rafael Nadal is ready for a return to top-level tennis, declaring himself 100 percent fit on Tuesday after fully recovering from a thigh injury sustained at the Australian Open.

The top-ranked player said he is ready to spearhead Spain in the opening singles match against Belgium on Friday in the first-round series, after injuring his left hamstring in the quarterfinals in Melbourne in January.

"If I am here it is because, physically, I am 100 percent," Nadal said after a training session.

After taking time off before slowly resuming training, he has been participating in two practice sessions a day with his Davis Cup partners in Charleroi.

With Nadal and top-10 players David Ferrer and Fernando Verdasco, Spain is the overwhelming favorite against Belgium. The top-ranked player for the hosts is Xavier Malisse, ranked 51st in the world, and the only one in the top 100.

During practice on the hard indoor surface, Nadal's leg was no longer strapped and he moved freely on the court.

Smiling happily, Nadal knows fully he can count on his teammates this weekend. On Saturday, Ferrer successfully defended his Mexican Open title before rushing to Belgium.

If team captain Albert Costa calls on his best player twice this weekend, Nadal will be ready.

"I am practicing hard. If the captain thinks I am the right player to start on Friday, I will do my best. We will see," Nadal said.

If play goes according to form, Spain could wrap up the best-of-five tie during the doubles on Saturday. It would give Nadal the sweetest comeback to competitive tennis before he moves to Indian Wells for the Parisbas Open next week.

He knows, though, that the Davis Cup rarely goes according to form, especially when the Spiroudome will be filled to its 6,500-capacity on Friday.

"When we play away all the confrontations are difficult," Nadal said.

Based on rankings, Spain should be a perennial challenger, but last year the team was whitewashed 5-0 by France in the quarterfinals.

"There are a lot of teams around the world that are able to beat us," Nadal said.

Comments
Topics mentioned in this article
Tennis Rafael Nadal
Get the latest updates on ICC T20 Worldcup 2022 and CWG 2022 check out the Schedule, Live Score and Medals Tally. Like us on Facebook or follow us on Twitter for more sports updates. You can also download the NDTV Cricket app for Android or iOS.