Milos Raonic put on an impressive serving display with a straight set semi-final win over Ryan Harrison at the San Jose Open, avenging a loss to the American in their only previous contest. 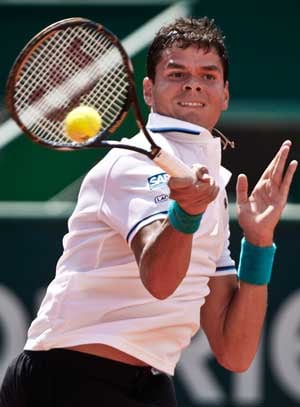 Milos Raonic put on an impressive serving display with a straight set semi-final win over Ryan Harrison at the San Jose Open, avenging a loss to the American in their only previous contest.

He advances to Sunday's final where he will face unseeded Denis Istomin of Uzbekistan who outlasted France's Julien Benneteau 6-3, 6-7 (4/7), 6-3 in a night match in the other semi-final.

"I think I did a really good job taking care of the serve," Raonic said. "What I was doing really well was making most of my first serves. But when I missed a few, I was still playing pretty well on the second serves.

"In the offseason, I didn't spend too many days working on the serve. It was more so the return of serve game. And I worked on every aspect, from the baseline to the net.

"I know when I have time, I try to focus a bit more on the return game and keep improving there."

World No. 94 Harrison won the only previous contest between the two ATP young guns, beating Raonic 7-6 (7/1), 4-6, 6-4 in the round of 32 at last year's Indian Wells tournament in southern California.

The loss to Harrison helped end Raonic's 2011 magic run which included becoming the first Canadian since 1995 to capture an ATP title when he won San Jose, and following up the next week by reaching the final of the Regions Morgan Keegan Championship in Memphis, Tennessee.

A string of injuries limited Raonic's playing time for much of 2011.

World No. 32 Raonic is seeking his third ATP title after opening this season with a win at the Chennai Open in New Delhi, India.

Against Harrison, the 196-centimetre Raonic won 84 percent of his first served points in the 78-minute match.

"His serve is obviously one of the best in the game," said Harrison.

Raonic failed to capitalize on two match points before finally ending it on the third, clinching the victory in the eighth game of the second set by breaking Harrison's serve.

Harrison won just 55 percent of his second-serve points, made one double fault and saved just one break point.

Benneteau ripped 10 aces but also made five double faults against world No. 61 Istomin, who is chasing his first ATP Tour title.

Comments
Topics mentioned in this article
Tennis Fernando Verdasco Milos Raonic Ryan Harrison
Get the latest Cricket news, check out the India cricket schedule, Cricket live score . Like us on Facebook or follow us on Twitter for more sports updates. You can also download the NDTV Cricket app for Android or iOS.