Rising star Milos Raonic of Canada breezed into the quarter-finals of the ATP Chennai Open with a 6-1, 6-4 win over Victor Hanescu of Romania on Wednesday. 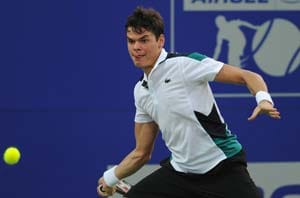 Rising star Milos Raonic of Canada breezed into the quarter-finals of the ATP Chennai Open with a 6-1, 6-4 win over Victor Hanescu of Romania on Wednesday.

The big-serving Raonic blasted nine aces to win his second round encounter in one hour and 14 minutes on the centre court of the Nungambakkam tennis stadium.

The 21-year-old Raonic showed glimpses of his power-packed game that made him the ATP's newcomer of the year in 2011, during which he jumped from number 156 to 25 before ending the year ranked 31.

Raonic took the first set in 27 minutes as he broke Hanescu twice and then secured another break in the seventh game of the second set to easily wrap up the match.

"I could not have asked for a better start to the year," said Raonic, who had lost in the qualifiers in Chennai last year.

"I know I have a good serve, but in this match I was more focused on improving my returns. I think I returned quite well and am feeling good about the future.

"I am hungry for success and will not cut corners to improve my game. I am ready to rough it out. I have a strong set of legs, but I still need to work on my fitness."

Raonic's quarter-final opponent will be Israeli Dudi Sela, who came from behind to overcome Benoit Paire of France 4-6, 6-2, 6-4.

Sela, who had upset sixth seed Fabio Fognini of Italy in the first round, recovered from a hesitant start to beat the Frenchman with fine rallies from the baseline.

Comments
Topics mentioned in this article
Tennis Fernando Verdasco Milos Raonic Victor Hanescu Vijay Amritraj Rafael Nadal Xavier Malisse Vishnu Vardhan
Get the latest Cricket news, check out the India cricket schedule, Cricket live score . Like us on Facebook or follow us on Twitter for more sports updates. You can also download the NDTV Cricket app for Android or iOS.