During her Miami Open match against Garbine Muguruza, Bianca Andreescu stretched full-length and sliced a forehand winner, shocking not just her opponent but even herself. 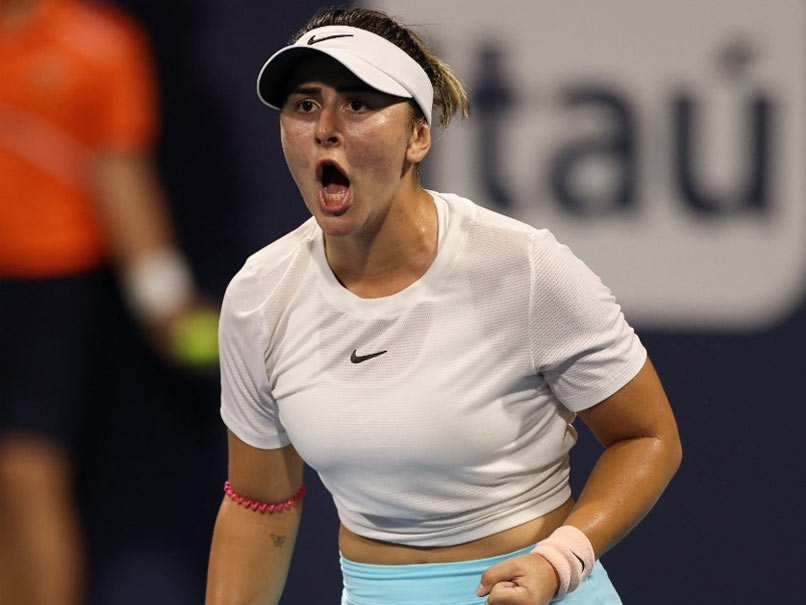 Bianca Andreescu made a brilliant comeback against Spain's Garbine Muguruza, triumphing in three sets to march into quarterfinals of the Miami Open on Tuesday (IST). Andreescu lost the first set but fought back to win the match 3-6, 6-2, 6-2 to set up a quarterfinal clash against Sara Sorribes Tormo. The highlight of Andreescu's massive win came in the final set on Muguruza's serve. During the point, Andreescu's feeble return landed in the middle of the court, allowing Muguruza to unleash a powerful cross-court forehand, Andreescu shuffled to her right and at full-length sliced a forehand winner back, shocking not just her opponent but even herself.

2019 US Open champion Andreescu has been on a comeback trail after returning from a 15-month injury absence.

She was knocked out of the Australian Open in the second round by Hsieh Su-wei in the Canadian's first tournament after her injury return.

The 20-year-old suffered an agonising defeat in the semi-finals of the Phillip Island Trophy, losing to Marie Bouzkova.

However, the win over an in-form Muguruza, former French Open and Wimbledon champion, will come as a massive boost to the Canadian.

"It was really tough. She started out playing really, really well. I don't think I was at the level I wanted to be right at the start of the match, because I knew she was going to come out really, really strong, and that's what she did," Andreescu was quoted as saying by wtatennis.com.

"But I had to re-adapt, which I did in the second set. I regrouped. I kept fighting. I changed my game plan a little bit as well. And it worked."

Comments
Topics mentioned in this article
Bianca Andreescu Garbine Muguruza Tennis
Get the latest updates on IPL Auction 2023 and check out  IPL 2023 and Live Cricket Score. Like us on Facebook or follow us on Twitter for more sports updates. You can also download the NDTV Cricket app for Android or iOS.