Melzer to open against Chardy in Davis Cup 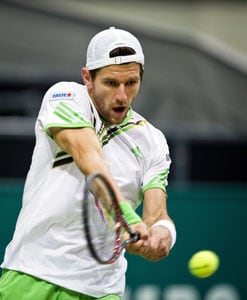 Stefan Koubek will play Gilles Simon in the second singles match after the draw made on Thursday.

The 10th-ranked Melzer said that "it should stand 1-0 for us (after my match) so I can take some pressure off for Stefan and add some pressure for Simon."

Melzer will team up with Oliver Marach for Saturday's doubles against Michael Llodra and Julien Benneteau, though captains can change that lineup as late as one hour before the match.

Austria has not been past the first round since 1995. Nine-time champion France lost last year's final to Serbia.

Comments
Topics mentioned in this article
Tennis Jurgen Melzer Jeremy Chardy
Get the latest updates on ICC T20 Worldcup 2022 and CWG 2022 check out the Schedule, Live Score and Medals Tally. Like us on Facebook or follow us on Twitter for more sports updates. You can also download the NDTV Cricket app for Android or iOS.