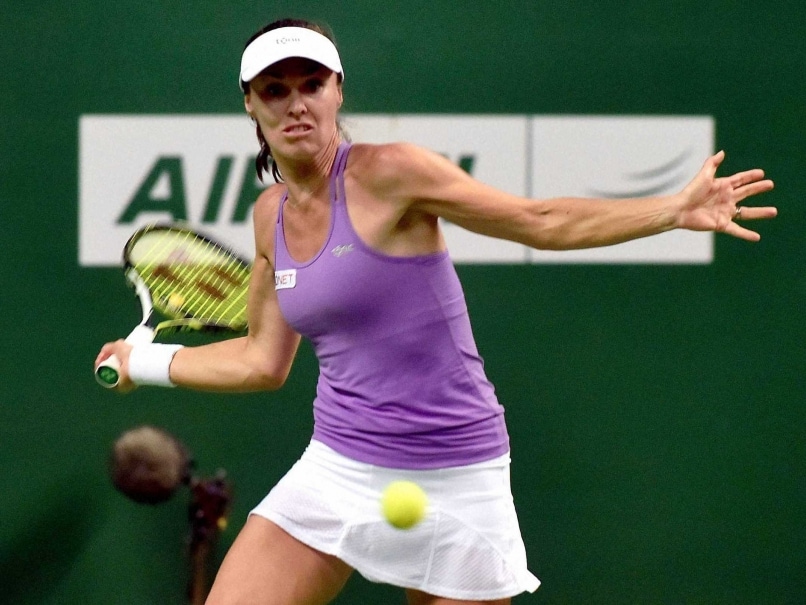 Hyderabad Aces defeated V Chennai Warriors 25-19 in a Champions Tennis League (CTL) match at the Sports Authority of Telangana State stadium here after the host team won four of the five sets in the match on Monday. (Click here for latest Tennis stories)

In a format where the winner is decided on the basis of total number of points in the five-set match, Hyderabad piled up 25 points against Chennai's 19.

Hyderabad had an easy victory in the Legends Singles, the first of the five set game, with the host team's Thomas Johansson trouncing Chennai's Rainer Schuettler 5-3.

The exciting set of the day was the Women's Singles clash between Swiss veteran Martina Hingis of Hyderabad Aces and Chennai's Heather Watson from Great Britain, who is currently ranked 55 in WTA Women's Singles rankings.

The contest provided yet another opportunity for the spectators in Hyderabad to witness the class of Hingis in a singles cotest.

Putting up a determined fight, the Swiss Miss, cheered lustily by her supporters, crushed her 23-year-old opponent to score a 5-2 victory, which set off instant celebrations by the spectators.

The Chennai side comprising Fernando Verdasco and Heather Watson put up a stiff resistance in the next set of Mixed Doubles against Ivo Karlovic and Martina Hingis of Hyderabad.

The match was a long-drawn affair with both sides refusing to let go of any chance to score a point. Heather Watson was agile on the court making quick points with her forehand shots.

The tight match resulted in a tie-breaker with both sides equalling the score at four. The seasoned Hingis and Karlovic, however, prevailed in the end scoring a 5-4 victory.

The Men's Doubles set too was a close call with a tie-breaker thrown up, but the Hyderabad's players had the last laugh.

With Hyderabad having an edge of seven points (20-13) after the Men's Doubles set, the last set of Men's Singles was rendered inconsequential.

In the tight match that too resulted in a tie-breaker, Chennai's Fernando Verdasco beat Hyderabad's ivo Karlovic 5-4 and the score was 24-18.

However, both sides got 1-1 each in a Super game over as the Men's Singles was continued and the final tally stood at 25-19.

Comments
Topics mentioned in this article
Martina Hingis Ivo Karlovic Heather Watson Fernando Verdasco Tennis
Get the latest updates on ICC T20 Worldcup 2022 and CWG 2022 check out the Schedule, Live Score and Medals Tally. Like us on Facebook or follow us on Twitter for more sports updates. You can also download the NDTV Cricket app for Android or iOS.