World number 113 Andujar was blown away by compatriot Nadal 6-0, 6-4 on Saturday. 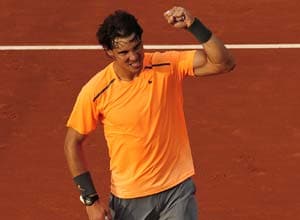 Rafael Nadal cruised into his seventh consecutive final since returning from a seven-month injury layoff as he beat compatriot Pablo Andujar 6-0, 6-4 to reach the Madrid Masters final.

World number 113 Andujar was blown away in the opening set, winning just nine points, as Nadal broke three times to take it 6-0.

The 11-time Grand Slam champion was given a slightly tougher test in the second, but needed just the one break to go 5-4 up before serving out the match.

Nadal will now face Tomas Berdych or Stanislas Wawrinka in the final on Sunday.