Juan Martin del Potro advanced to the second round of the Sony Ericsson Open on Wednesday, beating Ricardo Mello 6-4, 6-4. 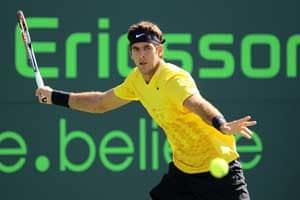 Juan Martin del Potro advanced to the second round of the Sony Ericsson Open on Wednesday, beating Ricardo Mello 6-4, 6-4.

Del Potro, the Argentine star who won the 2009 U.S. Open, was limited to three events last year because of a right wrist injury. He has jumped from 257th to 51st in the rankings this year, winning the Delray Beach International last month and reaching the semifinals in San Jose, Memphis and Indian Wells.

"I'm still improving match by match," said del Potro, 18-5 this year. "It's a good signal for my future, for my comeback, and for recovering my game."

He will face Philipp Kohlschreiber in the second round.

"I feel tired, but I'm really glad with my success between San Jose and today, and I have more energy to stay alive in this tournament," del Potro said. "I really like playing here in Miami. Many South American people come to see the tournament, so we feel really well."

Mattek Sands lost the one time she played Wozniacki, in the 2009 Italian Open.

"It's a good challenge for me and I like challenges," Mattek-Sands said. "You just got to go into the match knowing you're not going to get free points. For me, I'll stick to my same game plan. I'm going to play aggressive."

Comments
Topics mentioned in this article
Ricardo Mello Juan Martin del Potro Tennis Andy Roddick
Get the latest updates on ICC T20 Worldcup 2022 and CWG 2022 check out the Schedule, Live Score and Medals Tally. Like us on Facebook or follow us on Twitter for more sports updates. You can also download the NDTV Cricket app for Android or iOS.