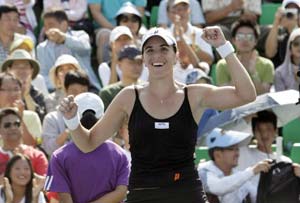 The 29-year-old Martinez Sanchez defeated Voskoboeva, a first-time WTA finalist, 7-6, 7-6 to win her first hardcourt tournament on the WTA and $37,000 in prize money.

The two players had marched to the final without losing a set on the way, with the unseeded Voskoboeva producing two upsets when she put out eighth seed Ekaterina Makarova and fifth seed Polona Hercog.

But the sixth-seeded Spaniard prevailed on Sunday with her tricky left-handed serve and outstanding net play.

She blanked the 26-year-old Kazakh 7-0 in the first set tie-break, then held off three set points to take the second set to a tiebreak, and rolled through that one 7-2.

Sunday's two-hour showdown was the sixth WTA final for Martinez Sanchez but her first on a hard court.

She is also the first Spaniard to win a WTA title on the surface since Anabel Medina Garrigues won the Canberra International in Australia in January 2006.

Martinez Sanchez's first five finals, of which she won four, were all on clay.

Comments
Topics mentioned in this article
Maria Jose Martinez Sanchez Tennis Galina Voskoboeva
Get the latest Cricket news, check out the India cricket schedule, Cricket live score . Like us on Facebook or follow us on Twitter for more sports updates. You can also download the NDTV Cricket app for Android or iOS.