Jankovic struggles through to Carlsbad quarters

Jelena Jankovic overcame problems with her serve to claim a 2-6, 6-4, 6-4 win over Melinda Czink in the second round of the Mercury Insurance Open on Thursday. 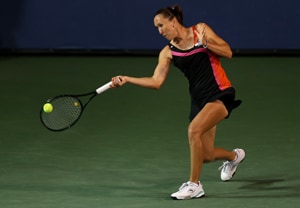 Jelena Jankovic overcame problems with her serve to claim a 2-6, 6-4, 6-4 win over Melinda Czink in the second round of the Mercury Insurance Open on Thursday.

The third-seeded Serb had a first-round bye and the former No. 1 player struggled throughout the match with her serve before closing it out in the third set.

"I was in trouble," said Jankovic, who was successful on only 55 percent of her first serves. "It wasn't easy. I was pushed. I had to change something."

After the players traded service breaks, Jankovic broke the Hungarian's serve right back for a 4-3 lead and stayed ahead for good.

"It was one of those days when you don't play well and you don't really feel your shots, but I found a way to win," she said. "Those are the days when you have to grind it out and get through it."

Jankovic reached the quarterfinals for the first time in six appearances here, where she will meet qualifier Yung-Jan Chan of Taiwan.

Urszula Radwanska of Poland cruised to a 6-2, 6-1 win over lucky loser Melanie Oudin, setting up a quarterfinal against No. 2 seed Dominika Cibulkova of Slovakia, who was a 6-2, 6-4 winner against New Zealand's Marina Erakovic.

Radwanska, the younger sister of world No. 2 ranked Agnieszka Radwanska, served well and took advantage of the American's subpar serve to control the match.

"I was playing very good, and especially I was serving good," said Radwanska, who will represent Poland in the Olympics. "Probably that was the key because I was holding my serve."

Radwanska, who won 88 percent (23 of 26) of her first serves, reached the quarterfinals for the second straight week. She lost last week at Stanford to eventual runner-up CoCo Vandeweghe.