"Finally It's Mine": Simona Halep Warms Up For Roland Garros With First Italian Open Trophy 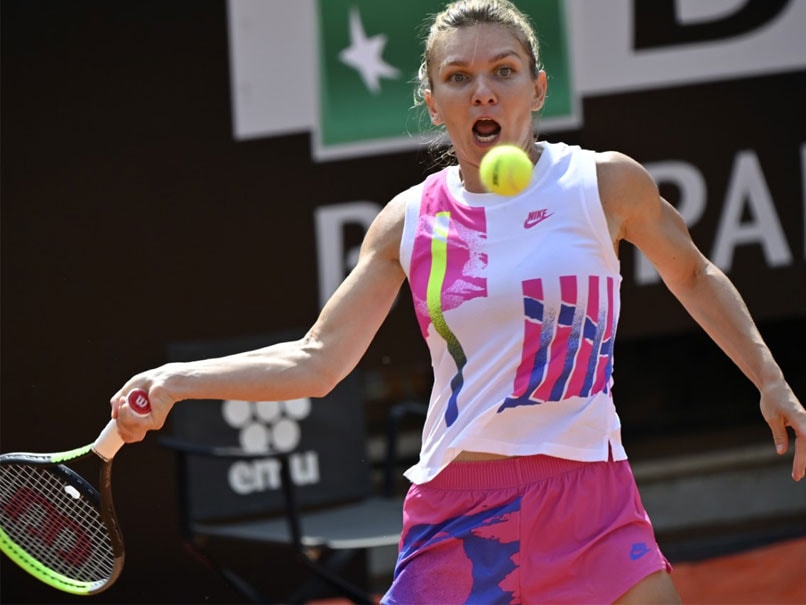 Simona Halep lifted her first Italian Open trophy on Monday, a confidence-boost ahead of next week's French Open, after defending champion Karolina Pliskova retired injured in the Rome final. World number twoHalep was competing in her third Rome WTA final, having finished runner-up in 2017 and 2018 on the clay at the Foro Italico. The top seed finally won her coveted trophy after Czech Pliskova retired while trailing 6-0, 2-1 in the final. "Finally I've won it," said the 28-year-old Halep.

"The start of my going up in the ranking was here in 2013. So I really dreamed to have this title."

Pliskova, the second seed, was playing with her left thigh heavily strapped after a series of tough matches on clay coming off the US hard court tour.

"I feel sorry, because an injury is an injury and is never easy," said Romanian Halep.

"But it doesn't change with anything. This trophy, it's mine now."

Czech Pliskova struggled with her serve, falling behind to a double break and handing Halep a 3-0 advantage in the opening set with a double fault.

Halep saved three break points against her on her next service game before conquering a one-sided first set in 20 minutes.

Pliskova had treatment on her lower back and upper leg before the second set, but pushed on with a break for 1-1 after half an hour.

But the 28-year-old called time in the third game, heading towards Halep to signify the end of the match after 32 minutes.

"Of course it's not the end of the tournament that we wish for," said Halep. "But I felt amazing in the first set, and I was very confident that even if we kept playing, I had the chance to win the match."

In total, Halep converted five of seven break point opportunities for her eighth win in 13 meetings with Pliskova, who converted one of four.

Wimbledon champion Halep's 22nd career title comes just a week before the start of the final Grand Slam of the season in Roland Garros, which she won in 2018.

"This gives me extra confidence," she said after extending her winning streak this season to 14 consecutive victories.

She won the Dubai title in February, before the coronavirus lockdown, coming back to claim victory in Prague last month having skipped the US Open.

"It's true, that I'm fresher," she continued.

"Of course, I did work hard at home, but I didn't have matches, many matches, so my body is not that used.

"So, yeah, it's a plus, in my opinion, that I feel fresh. With these matches here, I feel also confident. So, it's a better chance."

The two-time Grand Slam winner added: "I cannot think about winning the title in Roland Garros, because the tournament didn't start yet.

Former world number one Pliskova, now ranked fourth, had been having a successful week on clay after her disappointing second round exit in the US Open where she was the top seed.

Pliskova said he hoped to be ready for Roland Garros, a tournament in which she reached the semi-finals in 2017.

"There is a week, so I think that's plenty of time," she said.

"It's combination of just playing now every day and tough matches. It's clay, I was coming quite fast from hard court.

Pliskova also said that she believes Halep is now favourite for Roland Garros.

"Of course, she's going to be the favourite, because of the way she played, Prague also on clay.

"She won two tournaments on clay, so I think she's confident enough and she's had big success in Paris.

"So for sure she's going to be dangerous."

Comments
Topics mentioned in this article
Simona Halep Karolina Pliskova Tennis
Get the latest updates on ICC T20 Worldcup 2022, check out the Schedule and Live Score. Like us on Facebook or follow us on Twitter for more sports updates. You can also download the NDTV Cricket app for Android or iOS.