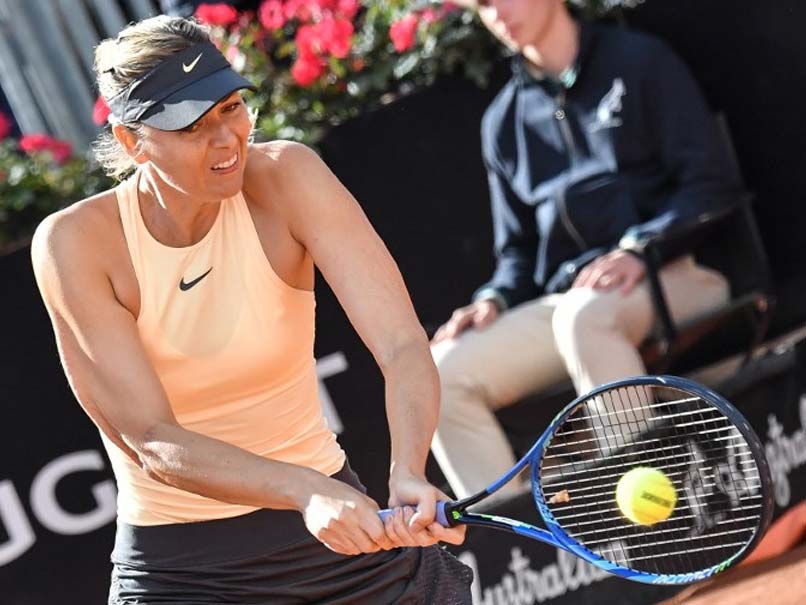 Defending champion Elina Svitolina eased into the third round of the WTA Italian Open on Tuesday as three-time winner Maria Sharapova needed a marathon three sets to get past Australian Ashleigh Barty. Svitolina, the fourth seed, received a first round bye and dropped just three games in a dominant 6-1, 6-2 victory over 35th-ranked Petra Martic. The 23-year-old Ukrainian won the biggest clay court title of her career last year at the Foro Italico. And she continued where she left off despite the rainy conditions, needing just over an hour to peg back her Croatian rival. By contrast, Sharapova needed two and a half hours to master 18th-ranked Barty 7-5, 3-6, 6-2 in their first round match.

"It was tough, tough conditions," said 40th-ranked Sharapova, who reached the quarter-finals in Madrid last week. "It felt like I was playing three different matches.

"There was a long wait and the way the court played, the way she played, the shadows, the little bit of a breeze out there. So, a lot going on.

"I think it was a really good way to end the match, to get that win."

Sharapova's victory, her 34th on clay in the Italian capital, came in her first meeting with Barty, who was making her Rome debut.

Barty pushed the five-time Grand Slam winner to a third set as she did against Australian Open champion Caroline Wozniacki last week in Madrid.

The game swung the Russian's direction in the final set when Sharapova held serve in a crucial 1-1 game from 0-40 down after having failed to convert three break points in the previous game.

Barty, ranked 18, saved two match points in the final game against the 2011, 2012 and 2015 winner but two unforced errors in a row handed Sharapova a second round berth.

Sharapova next meets Dominika Cibulkova in the second round. The pair have not played each other since the Slovak won in the fourth round of the 2014 Australian Open on her way to the final.

"It's been a while since I played her, she's always been a tough opponent especially on clay," said the Russian of the Slovak who leads 2-1 in clay court meetings.

Fifth seed Jelena Ostapenko of Latvia advanced to the third round past China's Zhang Shuai 6-2, 7-5.

Svetlana Kuznetsova made light work of Slovenian Polona Hercog 6-2, 6-4 in her first round match as the Russian warms up for the French Open which she won in 2009.

But there were uncontrollable tears for France's Kristina Mladenovic as dizziness forced her to call it a day while trailing Latvia's Anastasija Sevastova 6-3, 3-0.

In the men's event, Belgian ninth seed David Goffin was given a scare after leading 5-1 in the first set before losing six games in a row and dropping the first set to home hope Marco Cecchinato.

The Masters Open finalist got back on track by winning the next two 6-2, 6-2 to advance to the second round.

And Canadian teenager Denis Shapovalov battled past Czech veteran Tomas Berdych 1-6, 6-3, 7-6 (7/5), a week after becoming the youngest semi-finalist in Madrid.

The 19-year-old will become the new Canadian number one next week in place of Milos Raonic. "I'm a little bit in shock," he said. "It's crazy that it's come so early."

After a sloppy start Shapovalov found his feet in the second set breaking for a 3-1 advantage after Berdych hit a forehand into the net.

The world number 29 clinched the set, on his third set point of a seven-minute game at 5-3, when Berdych netted a crosscourt backhand.

Berdych came within two points of victory in the ninth game, and Shapovalov raced to the first four points of the tie-break, holding on despite Berdych coming back dangerously for 5/5.

Bosnia's Damir Dzumhur took 64 minutes to get past Spain's Fernando Verdasco to meet seven-time winner Rafael Nadal in the second round.

The rain returned in the evening with the match between Croatian fourth seed Marin Cilic and American Ryan Harrison suspended with the first set tiebreak 6-6 (3/3) after 50 minutes play.

Comments
Topics mentioned in this article
Maria Sharapova Tennis
Get the latest updates on IPL 2021, check out the IPL 2021 Schedule and Indian Premier League Live Score . Like us on Facebook or follow us on Twitter for more sports updates. You can also download the NDTV Cricket app for Android or iOS.