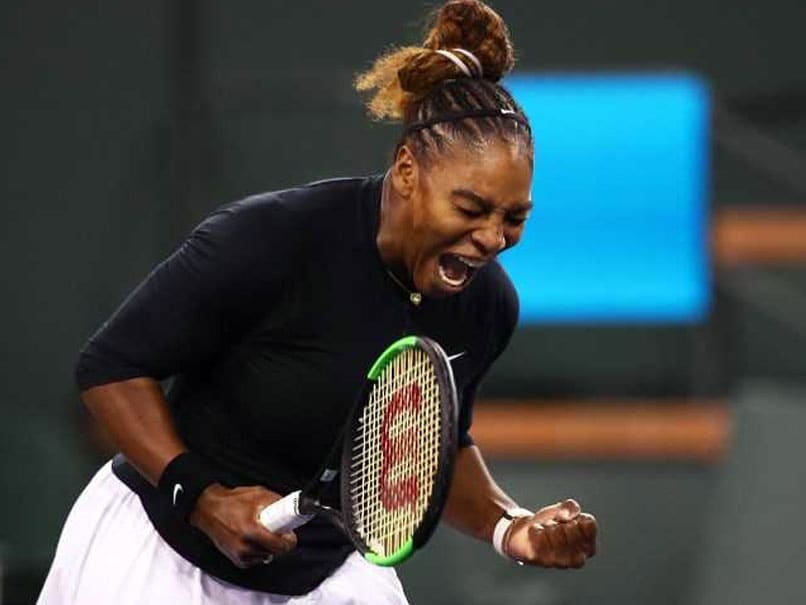 Serena Williams triumphed in straight sets to reach the third round of Indian Wells.© AFP

Serena Williams out-gunned Victoria Azarenka 7-5, 6-3 in an electrifying clash of former world number ones on Friday to reach the third round at Indian Wells. The two raised the temperature on a cold, windy night in the California desert, trading shots from every corner of the court before Serena Williams wrapped things up after two hours and 17 minutes. She finished it off in style, with a pair of unreturnable serves. "It was really good for me to kind of fight through that, because literally I had to fight for every point," Williams said.

The display worthy of a final came in the second round thanks to Azarenka's current ranking of 48th in the world -- and the bad luck of the draw.

The first set alone lasted one hour and 13 minutes.

Serena Williams, unable to serve it out at 5-3, was under pressure again at 5-5 but Azarenka was unable to convert five break points. Serena produced three service winners to take a 6-5 lead and broke Azarenka to pocket the set.

"She deserved to win," Azarenka said. "She played better on those important moments. I felt that every game was ad, deuce, ad, deuce. It was all about who was going to take that chance, and she took them a little better today."

While Serena Williams took her record over Azarenka to 18-4, the Belarusian said she would always relish any chance to take on her longtime rival.

"You know, as much as she's the toughest opponent I have ever played in my life, she's my favorite person to play against," Azarenka said. "Those type of challenges always motivate me."

Since their last meeting -- Azarenka's victory in the 2016 Indian Wells final -- both women have become mothers, adding another dimension to their on-court rivalry and off-court friendship.

"We're both moms, and we know how hard it is and how hard it's been for us to come back, starting literally from scratch and fighting our way back," Williams said.

They exchanged a warm hug at the net to cap what Azarenka called an "amazing" match.

"I think it's not a surprise that we have mutual respect and love off the court," Azarenka said. "On the court it's a fight. It's a war, it's a lot of intensity.

"I think it was quite an amazing match. And having such a match on International Women's Day, I felt that was really incredible."

Things won't get any easier for Serena Williams in her pursuit of her first title since the birth of daughter Alexis Olympia in September of 2017.

In the third round she faces another former world number one, Spain's Garbine Muguruza, a two-time Grand Slam champion who breezed into the third round with a 6-1, 6-3 victory over American Lauren Davis.

Elsewhere on Friday, world number two Simona Halep eased into the third round with a 6-2, 6-4 victory over Czech veteran Barbora Strycova.

Halep, who lifted the Indian Wells trophy in 2015, fired 18 winners and converted six of 11 break point chances to set up a third-round meeting with Ukrainian qualifier Kateryna Kozlova, a 6-4, 2-6, 6-0 winner over 31st-seeded Aliaksandra Sasnovich of Belarus.

But there was more misery for world number four Sloane Stephens, who was unceremoniously bundled out by Swiss qualifier Stefanie Voegele 6-3, 6-0.

Voegele, ranked 109th in the world, won the last eight games to sweep into the third round in just 68 minutes.

It's the second tournament in a row that 2017 US Open winner Stephens has been toppled by a qualifier, coming on the heels of a straight-sets defeat to 172nd-ranked Brazilian Beatriz Haddad Maia in Acapulco.

Voegele's victory is perhaps less of a shocker. She has now won the last four of five career meetings with Stephens.

Stephens said the windy weather was a factor, but not the main problem.

"I didn't play well," Stephens said. "It was unfortunate that I lost the second set 6-0. It happens."

Comments
Topics mentioned in this article
Serena Williams Victoria Azarenka Simona Halep Tennis
Get the latest updates on Fifa Worldcup 2022 and check out  Fifa World Cup Schedule, Stats and Live Cricket Score. Like us on Facebook or follow us on Twitter for more sports updates. You can also download the NDTV Cricket app for Android or iOS.