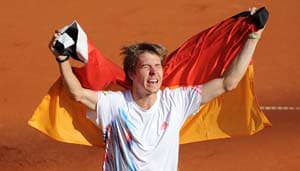 The 21-year-old Stebe, ranked 127th in the world and playing just his third Davis Cup rubber, rallied from 3-0 down in the first set to floor Hewitt 6-4, 6-1, 6-4 in just over two hours at Rothenbaum's clay-court stadium.

"This is the biggest success of my career, I was a bit nervous at the start," admitted Stebbe, who was cheered every point of the way by the 4,400-strong crowd against Hewitt, ten years his senior.

"It was a crazy atmosphere out there."

Australia were bidding to return to the World Group for the first time since 2007 and Hewitt's defeat means they will be playing in the Asia/Oceania Group again in 2013.

After racing into a 3-0 lead, Hewitt, now ranked 100th in the world, laboured as Stebe composed himself to take the first set, then dominated the 2002 Wimbledon winner in the second making just five unforced errors.

Hewitt, who was playing his third game in three days, dug deep, but was broken in the seventh game of the third set as Stebe served out for only his second Davis Cup win having made his debut against Argentina in February.

Germany's Philipp Petzschner, ranked 101st in the world, had been tipped to step in to play the final rubber, but a left knee injury forced him out, leaving Stebe to face Hewitt.

Australia started the day badly when teenager Tomic lost 6-4, 6-2, 6-3 to Mayer as the Germany levelled the scores at 2-2 after four rubbers.

Having beaten Hewitt in straight sets in Friday's singles match, Mayer, ranked 25th in the world, handed out the same treatment to Tomic to wrap up victory in just one hour, 31 minutes.

After Tomic and Mayer both won Friday's singles matches, Hewitt and Chris Guccione had enjoyed a 6-3, 6-2, 2-6, 7-6 (7/4) doubles victory over Benjamin Becker and Petzschner on Saturday to make it 2-1 to Australia overnight.

Comments
Topics mentioned in this article
Tennis Lleyton Hewitt Australia Cricket Team VfB Stuttgart Novak Djokovic Juan Carlos Ferrero Nikolay Davydenko Roger Federer David Ferrer Jo-Wilfried Tsonga Germany
Get the latest updates on India vs South Africa and check out  Schedule, Results and Live Score. Like us on Facebook or follow us on Twitter for more sports updates. You can also download the NDTV Cricket app for Android or iOS.