Serena Williams said she had suffered a pectoral muscle injury in her third-round win over Julia Goerges and "can't serve at all". 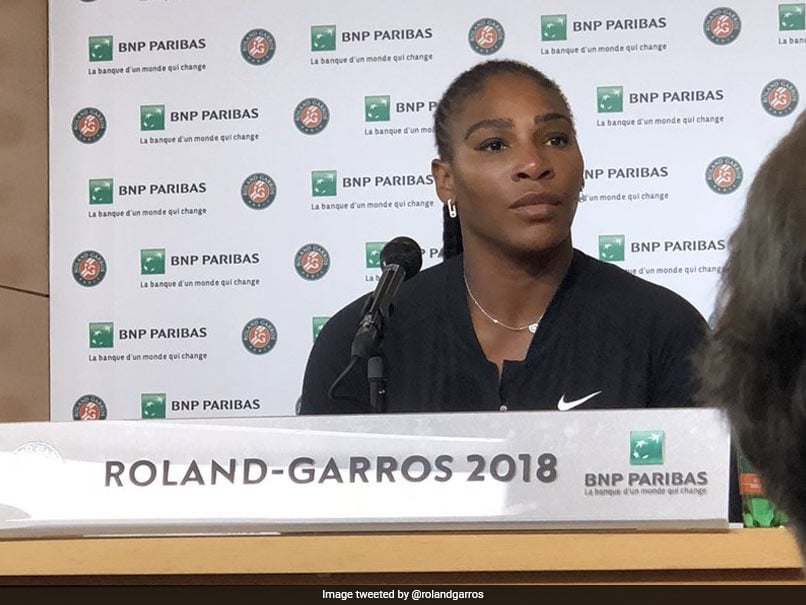 Serena Williams withdrew shortly before she was due on court to face Maria Sharapova.© Twitter

Serena Williams announced her shock withdrawal from the French Open on Monday with injury just minutes before her scheduled fourth-round clash against long-time rival Maria Sharapova. The 36-year-old said she had suffered a pectoral muscle injury in her third-round win over Julia Goerges and "can't serve at all". The 23-time Grand Slam champion added that she would stay in Paris for scans on the injury to find out how long she will be out of action. She was unable to say whether or not she would be fit for Wimbledon which gets underway in four weeks' time.

"I'm beyond disappointed," added three-time Roland Garros champion Serena who was playing in her first Grand Slam since winning the 2017 Australian Open.

She was also playing just her third tournament of the year after giving birth to daughter Olympia in September.

"I gave up so much from time with my daughter and time with my family all for this moment. So it's really difficult to be in this situation."

The shock withdrawal came just minutes before she was due on Court Philippe Chatrier to face bitter rival Sharapova.

Serena has not lost to the Russian since 2004, winning the last 18 matches.

It had been the most eagerly-awaited match of the tournament, coming just two days after Serena had blasted Sharapova's autobiography for being "100 percent hearsay" when it came to references about her.

Sharapova, the champion in Paris in 2012 and 2014, goes on to play a first quarterfinal at the Slams since losing to Serena at the same stage at the 2016 Australian Open.

It was in Melbourne that Sharapova tested positive for meldonium after which she served a 15-month doping ban.

She will face either 2016 champion Garbine Muguruza or Lesia Tsurenko of Ukraine for a semifinal place.

Comments
Topics mentioned in this article
Serena Williams Maria Sharapova Tennis
Get the latest updates on IPL 2021, IPL Points Table , IPL Schedule 2021 , live score . Like us on Facebook or follow us on Twitter for more sports updates. You can also download the NDTV Cricket app for Android or iOS.