After a 6-3, 6-2, 6-1 defeat to Rafael Nadal in the French Open semis, Andy Murray still has a lot of positives to take from Roland Garros and feels he can only improve from here on. 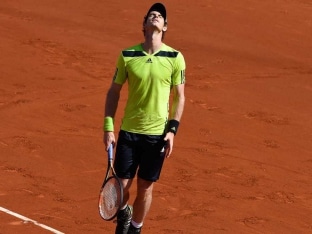 Andy Murray left the French Open on Friday encouraged by his run into the semi-finals but scarred by the relentless pounding he took from Rafael Nadal in a one-sided last four tie at Roland Garros.

The Wimbledon champion won a 22-point opening point of the match on a sun-splashed centre court, but that was as good as it got as the eight-time champion turned on the power to win 6-3, 6-2, 6-1 in just 100 minutes.

The scoreline was ugly, but worse than that, Murray appeared powerless to put up any kind of resistance to the Nadal steamroller as the Scot endured one of his worst defeats in his Grand Slam career.

It had, he admitted, been a painful experience at the end of a tournament where successive wins over Philipp Kohlschreiber, Fernando Verdasco and Gael Monfils had given clear indication that he was back to his best after back surgery and the departure of coach Ivan Lendl.

"You can go out there with all the tactics in the world, but when he's hitting the ball like that, very difficult to hit the ball where you want to," he said.

"His shot was bouncing incredibly high. It was very difficult to do much with the ball. Then when I did have the opportunity, I wanted to make a winner or make him run too much, trying to hit too close to the lines, and end up making a lot of mistakes.

At least Murray knows what he has to do next and that is get ready for the defence of the Wimbledon title he won last summer, which turned him into a national hero being the first home champion for 77 years.

But even his return to grass at Queens Club in London next week might be hard to take on board given the severity of his defeat at Roland Garros.

Asked how he would be able to switch his focus back to grass after such a devastating loss Murray replied: "That's a good question.

"It's difficult, because I normally strike the ball fairly cleanly. Today I was mis-hitting a lot of balls. It was incredibly frustrating. I wanted to play better and better as the match went on.

"In some ways you start trying too hard, and it doesn't always appear that way. But you want to do stuff too badly, and you end up making more mistakes and things get worse.

"I never want to say forget about matches like this, but obviously the grass court season starts in a couple of days and I need to switch my mind to that."

Also on Murray's mind is the question of who will be is new coach to replace Czech great Ivan Lendl who walked away from the job in March after a successful partnership that brought the Scot the US Open and Olympic titles in 2012 followed by the crown jewel of Wimbledon last year.

Various names have been linked to the position - Mats Wilander, John McEnroe, Pat Cash and even Martina Navratilova and Amelie Mauresmo, but Murray has given little away other than that he is thinking about it.

The chances of coming to a decision before Wimbledon starts, he said, is about fifty/fifty.