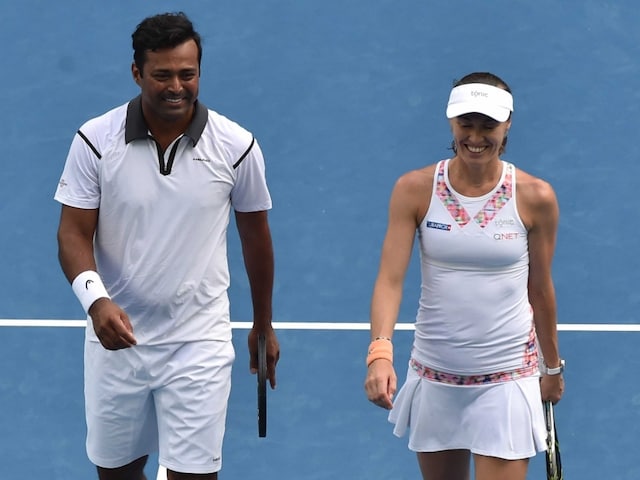 Leander Paes and Martina Hingis will take on Sania Mirza and Ivan Dodig in the mixed doubles final of the French Open.© AFP

Indo-Croatian second seeds Sania Mirza and Ivan Dodig have set up a mouthwatering clash against Leander Paes and Martina Hingis in the mixed doubles final of the French Open in Paris.

Leander Paes has won the French Open men's doubles in 1999, 2001 and 2009 but the only doubles title missing from his cabinet in the mixed doubles crown of Paris. The 42-year-old Indian had only once reached the final in Paris, way back in 2005, which he lost while partnering the legendaryÂ Martina Navratilova.

Mirza on the other hand had clinched the mixed title of the lone clay court Major four years ago with compatriot Mahesh Bhupathi.

Earlier in the day, Paes inched closer towards completing a 'Career Slam' in mixed doubles with Swiss partner Hingis. The unseeded Paes and Hingis scored a dominating 6-4, 6-3 win over fifth seeds Elena Vesnina and Bruno Soares in the quarterfinals of the clay court Major.

Mirza and her Croatian partner Dodig, seeded second, overcame a mid-match lapse to beat the seventh seeded Yung-Jan Chan and Max Mirnyi 6-1, 3-6, 10-6 in their quarterfinal.

Sania last won a mixed doubles Grand Slam trophy at the 2014 US Open with her then partner Bruno Soares.

They next face third seeds and local favourites Kristina Mladenovic and Pierre-Hugues Herbert, who got the better of American eighth seeds Bob Bryan and Coco Vandeweghe 2-6, 6-2, 13-11 in their quarterfinal match.

Paes and Hingis, winners of Australian Open, Wimbledon and US Open in 2015, next face sixth seeds Andrea Hlavackova from Czech Republic and Frenchman Edouard Roger-Vasselin.

If Mirza and Paes win their respective semifinals, they will fight for the title. While Paes has nine mixed doubles crowns, Mirza has won three in her career.

Comments
Topics mentioned in this article
Sania Mirza Ivan Dodig Martina Hingis Leander Paes Tennis
Get the latest Cricket news, check out the India cricket schedule, Cricket live score . Like us on Facebook or follow us on Twitter for more sports updates. You can also download the NDTV Cricket app for Android or iOS.