Fifth seeds Sania Mirza and Cara Black were clinical in their 6-3, 6-3 win over the Serbian-Russian combo of Jelena Jankovic and Alisa Kleybanova. 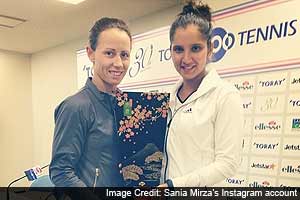 Fifth seeds Sania and Cara were clinical in their 6-3, 6-3 win over the Serbian-Russian combo.

However, they are now up against the top seeded pair of Su-Wei Hsieh from Taipei and China's Shuai Peng, to whom they have already lost twice this season.

Sania and Cara had ended runners-up to Su-Wei and Shuai at Indian Wells and again lost to them in the quarterfinals of the Madrid event.

At the Australian Open also Sania and Cara had lost in the quarterfinals when they lost to top seeds Sara Errani and Roberta Vinci.

Bopanna and his partner Katarina Srebotnik, seeded second, frittered away a good start to lose the mixed doubles quarterfinals 6-2 4-6 5-10 to eight seeds Julia Goerges from Germany and Serbia's Nenad Zimonjic.

Bopanna had made a second round exit from the men's doubles event with Aisam-ul-haq Qureshi.