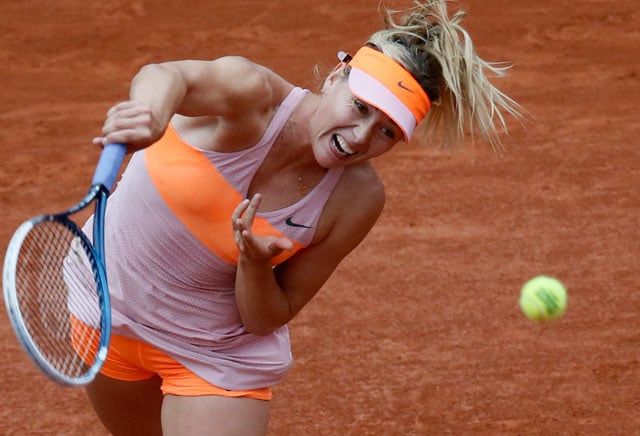 The Spanish world number 35 has been one of the sensations in the women's draw having knocked out world number one and defending champion Serena Williams in round two.

But Russian seventh seed Sharapova, who has won each Grand Slam once in her career, will have experience on her side against a player who captured her first WTA title in Hobart this year.

"Our job is to play the opponent that we're facing on that particular day. That's how I look at things, I don't get too far ahead of myself," said Sharapova who lifted the trophy in Paris in 2012.

"My opponent is (Garbine) Muguruza, and she's playing a great tournament. That's what I'm looking at, I'm not looking at anything else, even though I'm very well aware of other matches."

Muguruza, who overcame the challenge of French wildcard Pauline Parmentier in straight sets on Sunday, made the fourth round in Australia this year and has now gone one round better in Paris.

"I think she's a great fighter, amazing player. She has really good shots. She has been the world No. 1, so it's tough," the Venezuelan-born right hander said about Sharapova.

The winner will take on rising Canadian star Eugenie Bouchard or Spanish 14th seed Carla Suarez Navarro after both players sailed through their fourth round matches in straight sets.

Bouchard has been tipped as one of the future stars on the women's circuit although the future may be now for the Montreal native who has only dropped one set all tournament.

"I'm confident and I really believe in my skills. I believe I can play with the best girls out there," said 20-year-old Bouchard who reached the Australian Open semi-finals this year.

Looking ahead to reaching her second last four slot in consecutive Grand Slams, the loss of the top three seeds means the title is there for the taking.

"The top three seeds are such great players and champions," continued Bouchard on the demise of Williams, Li Na and Agnieszka Radwanska.

"On any given day players can have a bad day and things like that. It just happens, it's life."

Barcelona resident Suarez Navarro has kept a low profile making her way into the last eight which was eased by the elimination of Polish third seed Radwanska.

Croatian Ajla Tomljanovic who knocked out Radwanska, was the Spaniard's fourth round victim in straight sets.

She has now equalled her 2008 Roland Garros result, a feat she also achieved at the Australian Open in 2009 and the US Open last year.

Now she takes on Bouchard who won her first WTA event the week before Roland Garros at Nuremberg.

"She's playing good. She won one tournament last week. She was in the semi-final also in Australian Open. It's gonna be a really tough match," said Suarez Navarro.

"I have acquired more experience than at that time. And talking about tennis, of course I can still improve. She's already reached the semi-finals, whereas I have never done it but compared with 2008, I'm definitely more aggressive."