Tomas Berdych, the 2010 Wimbledon runner-up, broke the big-serving John Isner once in each set on Sunday and won the fourth-round match 6-4, 6-4, 6-4. 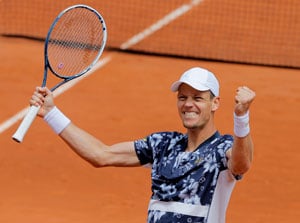 John Isner failed in his bid to become the first American man in the French Open quarterfinals since Andre Agassi in 2003, losing in straight sets to sixth-seeded Tomas Berdych of the Czech Republic.

The 10th-seeded Isner, who lives in Florida, had been broken only once in his first three matches at Roland Garros this year. He was the last of the eight U.S. men in the draw. No American man has made it to the quarterfinals at any Grand Slam tournament since 2011.

Berdych, a French Open semifinalist in 2010, next faces Roger Federer or Ernests Gulbis.