Simona Halep faces Maria Sharapova for the French Open crown. Here are things that are largely unknown about the Romanian professional tennis player. 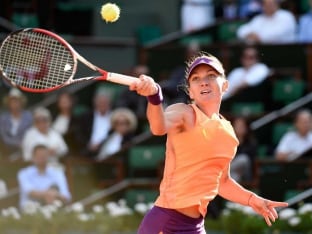 Five things to know about Simona Halep who will face Maria Sharapova in Saturday's French Open final at Roland Garros:

- When she was a teenager she went underwent breast reduction surgery to take her size from a 34DD to 34C. It was a measure aimed at improving her movement around the court. However, the 22-year-old is reluctant to keep talking about it. "Sorry, but I don't want to speak about this one. It was a long time ago and it's something personal, so I'm sorry. About tennis I will speak with pleasure, but that problem, it's my personal thing. Sorry."

- Her manager is Virginia Ruzici, the only Romanian woman to win a Grand Slam title when she claimed the 1978 French Open. Ruzici was also the runner-up in Paris to Chris Evert in 1980.

- She has footballer's legs. Well, that's what her coach Wim Fissette reckons.

- She plays tennis but doesn't watch a lot of it, neither live nor on TV

- Halep is the first player since Martina Hingis at the 1997 Australian Open to reach her first Grand Slam final without dropping a set (and Hingis went on to win that final in straight sets).