Novak Djokovic and Rafael Nadal clash in a blockbuster French Open final on Sunday with history on the line for both men. 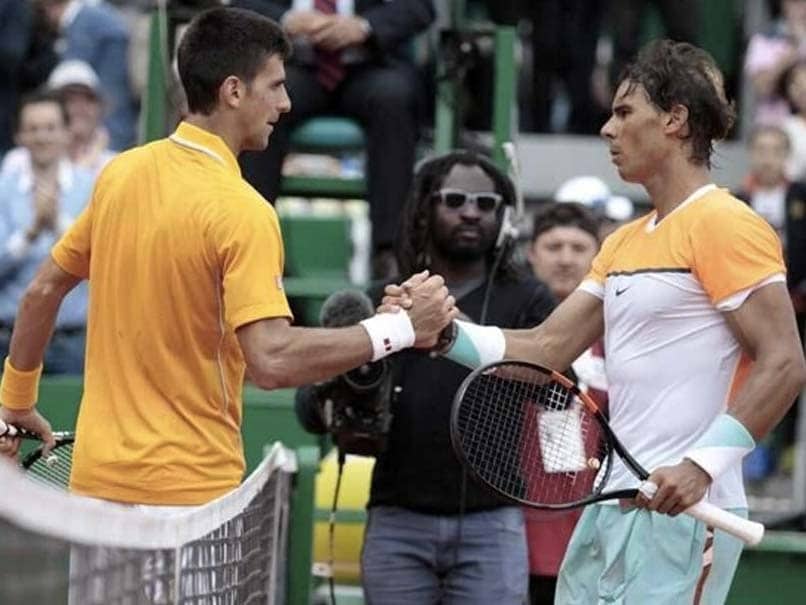 Novak Djokovic and Rafael Nadal meet for the 56th time on Sunday.© AFP

Novak Djokovic and Rafael Nadal meet for the 56th time on Sunday in a Roland Garros final blockbuster with history on the line for both men. World number one Djokovic is chasing an 18th Grand Slam title and a second French Open which would make him the first man in half a century to win all four Slams twice. Defending champion Nadal, the world number two, can win a 13th Roland Garros and 20th major which would tie the all-time men's record held by Roger Federer. Victory on Sunday would also give the 34-year-old Spaniard a 100th match win in Paris against just two defeats in 15 years.

One of those losses came against Djokovic in the 2015 quarter-finals, the last time the pair clashed on the crushed red brick surface of Court Philippe Chatrier.

The Serb has won 37 matches in 2020 with his one defeat self-inflicted via his infamous default at the US Open.

Stefanos Tsitsipas, who pushed Djokovic to five sets in a breathless semi-final, sees few flaws in the top seed's game.

"He has reached almost perfection," said the Greek.

The 22-year-old matched Djokovic when it came to all-out assault on Friday night but at the crunch moments, the Serbian wall stood firm as the world number one saved 11 of 15 break points he faced.

He has won 14 of their last 18 meetings and the last three at the Slams.

However, the pair's most recent three matches on clay have all gone Nadal's way with Djokovic's last victory on the dirt coming in the Rome quarter-finals four years ago.

'Not my biggest match'

"This is the house of Rafa," said Djokovic, describing facing the Spaniard on clay as the sport's "biggest challenge".

However, he insists that he has played far more significant finals and pointed to his first win over Nadal at a Slam at Wimbledon in 2011.

"I don't think this is the biggest match that I have ever played in my life," he said.

"In terms of importance, probably the first Wimbledon final that I actually played against him.

"Wimbledon was always the one that I wanted to win as a kid and dreamed of winning. That's probably the one that stands out."

Djokovic also put his 2016 Paris final win over Andy Murray, which allowed him to celebrate a career Grand Slam, above Sunday's latest instalment of his Nadal rivalry.

"Every French Open final that I played was the match of my life before I actually won it."

Despite his high praise for his opponent, Djokovic sees an advantage for him with the tournament being played in the autumn rather than its traditional spring and early summer slot.

The weather is cooler, the conditions heavier.

"The conditions are different than the ones that we are used to playing in May and June," said Djokovic.

"I think that could be a better chance for me, obviously the ball is not bouncing as high over the shoulder as he likes it usually."

Nadal thrives in the heat and bright sunshine and has been wary of the chill and the damp throughout the tournament, complaining that players are exposed to dangers as a result.

His run to a 13th final in Paris has been untroubled as he has yet to drop a set.

However, he has only faced one seed -- Argentine number 12 Diego Schwartzman in the semi-finals.

Nadal is cautious of reading too much into his smooth progress in Paris or his overall 17-7 clay court record over Djokovic.

"Different circumstances, different kind of tournament and different situation," said Nadal ahead of their ninth clash in a Grand Slam final.

"The only thing I know is to play against Novak, I need to play my best. Without playing my best tennis, the situation is very difficult.

"I know that this is a court where I have been playing well for such a long time, so that helps.

"He is one of the toughest opponents possible."

Meanwhile, Nadal's coach Carlos Moya told AFP that they have a specific plan to deal with Djokovic.

"It is a very important challenge, it is clear that he is one of the greats in history. I don't know if it is more difficult than facing Federer in his prime at Wimbledon but we have a plan," Moya told AFP.

Novak Djokovic Rafael Nadal Roger Federer Tennis
Get the latest updates on IPL 2021, check out the IPL 2021 Schedule and Indian Premier League Live Score . Like us on Facebook or follow us on Twitter for more sports updates. You can also download the NDTV Cricket app for Android or iOS.