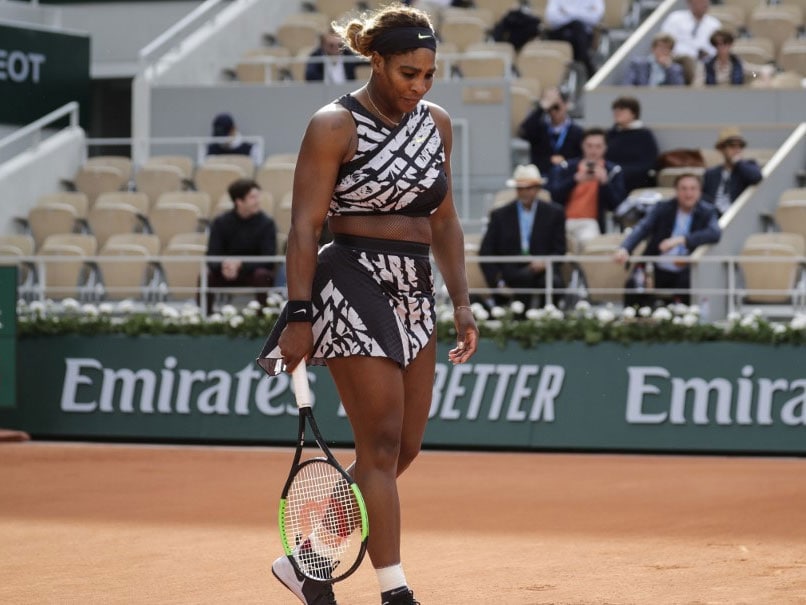 Serena Williams was knocked out of the French Open 2-6, 5-7by compatriot Sofia Kenin.© AFP

Serena Williams suffered her earliest Grand Slam exit since 2014 when she crashed out of the French Open on Saturday, ending her bid to win a record-equalling 24th major, just hours after world number one Naomi Osaka also suffered a shock defeat. Williams was beaten 6-2, 7-5 by US compatriot Sofia Kenin, who wasn't even born when the American legend made her Paris debut in 1998, in the third round. Top seed Osaka's hopes of winning a third successive Grand Slam ended when she was knocked out by unheralded Katerina Siniakova of the Czech Republic, 6-4, 6-2.

Their losses mean that 14 of the top 20 seeds in the women's draw have failed to make the second week in Paris.

It was 37-year-old Serena's earliest exit at the Slams since a third round loss to Alize Cornet at Wimbledon in 2014.

"She played really well, especially in the first set where she hit pretty much within an inch of the line all the time," said Williams.

The America veteran, who played just one clay court match in Rome before suffering a knee injury in the run up to the French Open, said she had expected to progress further in Paris.

"I would have expected to have gotten past the the third round. If someone said I would only get this far, I'd have said they were a liar.

"I haven't been on the court as much as I would have wanted to. It's been a gruelling season."

Kenin, the 20-year-old world number 35, will face eighth seed Ashleigh Barty of Australia for a place in the quarter-finals.

"There's a lot of emotions now," said the Russian-born player.

"Serena is such a great champion and I have all the respect for her."

Comments
Topics mentioned in this article
Serena Williams Tennis
Get the latest updates on ICC Women's Cricket World Cup 2022 and IPL 2022, check out the Schedule , Live Score and IPL Points Table. Like us on Facebook or follow us on Twitter for more sports updates. You can also download the NDTV Cricket app for Android or iOS.