Nadal is now just the second man to reach 11 finals at the same Slam, equalling Roger Federer's mark at Wimbledon. 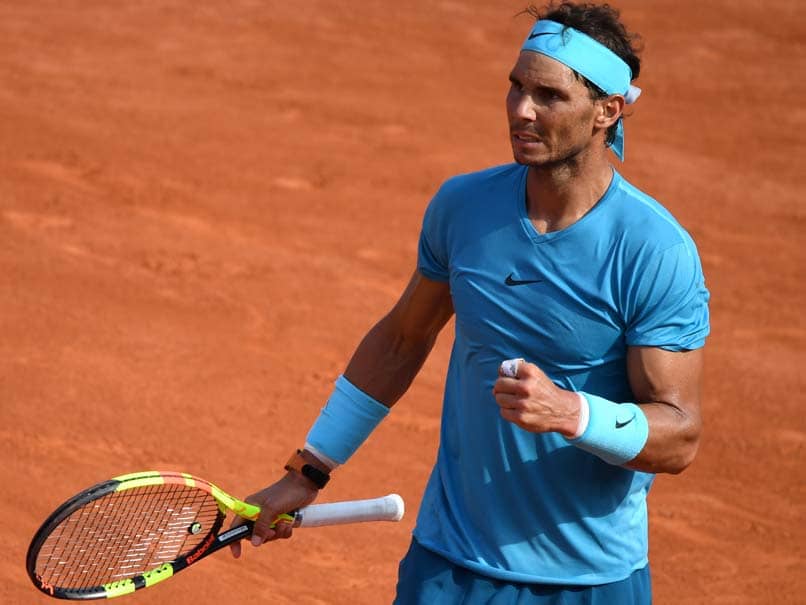 Ten-time champion Rafael Nadal reached his 11th French Open final on Friday when he demolished Juan Martin del Potro in straight sets, setting up a title showdown with Dominic Thiem, the only man to defeat him on clay in the last two years. Nadal, a 16-time Grand Slam champion, claimed his 85th win in Paris against just two losses after weathering a big-hitting opening from 2009 US Open winner Del Potro to win 6-4, 6-1, 6-2. In his 24th Grand Slam final, Nadal will face Thiem who ended Marco Cecchinato's French Open fairytale, reaching his first major final with a 7-5, 7-6 (12/10), 6-1 victory. Seventh seed Thiem is the first Austrian to make a final at the majors since Thomas Muster was champion in Paris in 1995.

"It was a very difficult first set and Juan Martin had lots of opportunities. He was a little unfortunate," said Nadal who reeled off 14 of the last 17 games, having seen Del Potro fail to convert any of his seven break points.

Nadal is now just the second man to reach 11 finals at the same Slam, equalling Roger Federer's mark at Wimbledon.

"It's impossible without hard work and going through tough moments. "You have to be focussed and keep your passion for the game. I never dreamed in 2005 when I played my first final here that I would be in another one."

Thiem is the only man to beat Nadal on clay in the last two seasons -- in Madrid this year and Rome in 2017. But the Spaniard was impressive on Friday, finishing with 35 winners and 19 unforced errors to Del Potro's analysis of 20 and 32. "Thiem is an amazing player. He beat me in Madrid, he has big power so I have to be at my best and improve," said Nadal.

World number one Nadal went into Friday's clash with a 9-5 career record against Del Potro, including all three meetings on clay.

However, it was Del Potro who was in the ascendancy in the rallies in the first set.

The fifth seed, playing in his first Roland Garros semi-final in nine years, had three break points in the third game and three more in the ninth.

However, the 29-year-old was unable to capitalise and Nadal made him pay in the 10th game when he claimed the opener off a netted backhand.

Del Potro had required the doctor early in the first set after appearing to jar his ankle in the red clay.

He suffered a worrying power cut in the second set, slipping to 5-0 down on a double break, wasting his seventh break point out of seven on the way.

Nadal tightened his grip, going to 5-1 on another double break in the third set and sealed the match when Del Potro hit a backhand long.

World 72 Cecchinato had knocked out three seeded players to reach the semi-finals, including 12-time major winner Novak Djokovic in the quarter-finals.

But Thiem, 24, was too strong and now believes he has a particularly powerful weapon on his side for the final -- breakfast.

"I need to regenerate and have a good breakfast to keep up my good level. "Full power on Sunday."

Thiem, who was playing in his third successive French Open semi-final, admitted the second set had been a nervy encounter after needing five set points to get through it.

"The big key was the second set," he said.

"It was a really close tiebreak and I didn't want that especially after I missed an easy volley at 6/4.

"That was not a nice feeling."

Cecchinato had never won a Grand Slam match before this year's Roland Garros but made the semis with a string of stunning wins.

He put out seeded players Pablo Carreno Busta and David Goffin before the seismic shock of knocking out 2016 champion Djokovic in the quarter-finals.

"Today, all day, on Philippe Chatrier, the fans said 'Forza, Marco', so I think this is the best moment for me," said Cecchinato.

Comments
Topics mentioned in this article
Rafael Nadal Juan Martin del Potro Tennis
Get the latest updates on IPL 2021, IPL Points Table , IPL Schedule 2021 , live score . Like us on Facebook or follow us on Twitter for more sports updates. You can also download the NDTV Cricket app for Android or iOS.